Thanks for reaching out! I'll be in touch soon.
Close
Yikes! Looks like the form is busted. Check back later, or try getting in touch with me on twitter
HomeProjects >Journal
TwitterInstagramLinkedInContact Form
Close
Red Bear Brewing CompanyIllustration CollectionLogo Collection
< Go Back
Close

After a massively successful first year in business, DC's first 100% gay and veteran-owned brewery,Red Bear Brewing Company, was ready to start canning their products. They contacted me asking if I was interested in helping them create an artwork system that could be used across all their beers, starting with two of their most popular: the 51st State IPA, and the Tall Dark & Nutty stout.

There were few requirements on Red Bear's end around what they wanted the label artwork to look like. They asked was for the artwork to have really big personality, and to stand out amongst their local competition in DC. Although the process for this project was just a few simple steps (sketch concepts, get required content, then refine and finalize the artwork), I can't say we didn't hit a few bumps in the road. I had my laptop stolen during a trip to Costa Rica which caused us to lose some time until I could get a new machine after I was stateside again; then stay-at-home orders for COVID-19 were enacted just as we were finalizing the artwork for the first beer labels, which caused everyone's priorities to shuffle. But, because I kept organized, the Red Bear team and I were able to roll with the punches as they came! Despite having to make some last minute changes, customers were delighted to be able to get some handsome Red Bear brews while under quarantine.

My roles and contributions 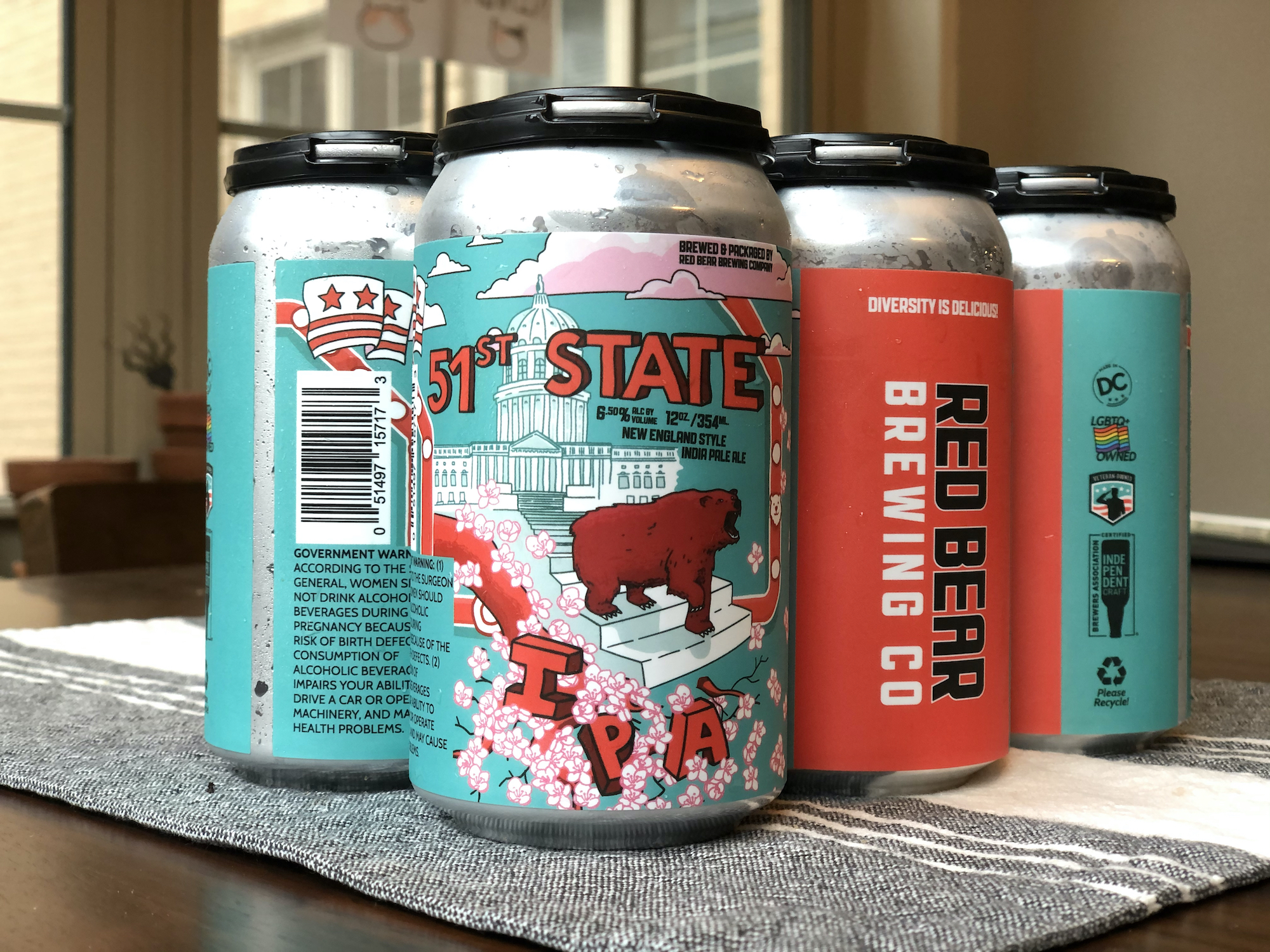 Scoping out the local competiton

Like many other cities in the United States, DC's beer scene has blossomed with independent craft brewers rising in popularity. Despite being new, Red Bear has an advantage over many competitors because they're located just a couple hundred yards from the NoMa metro stop on the red line. With that in mind, I looked at competitors who are also considered downtown(ish) breweries that were easy enough to get to without a car, as well as some popular household names amongst District residents that can easily be found in grocery stores, or that are commonly listed under "local brews" on drink menus throughout the city. 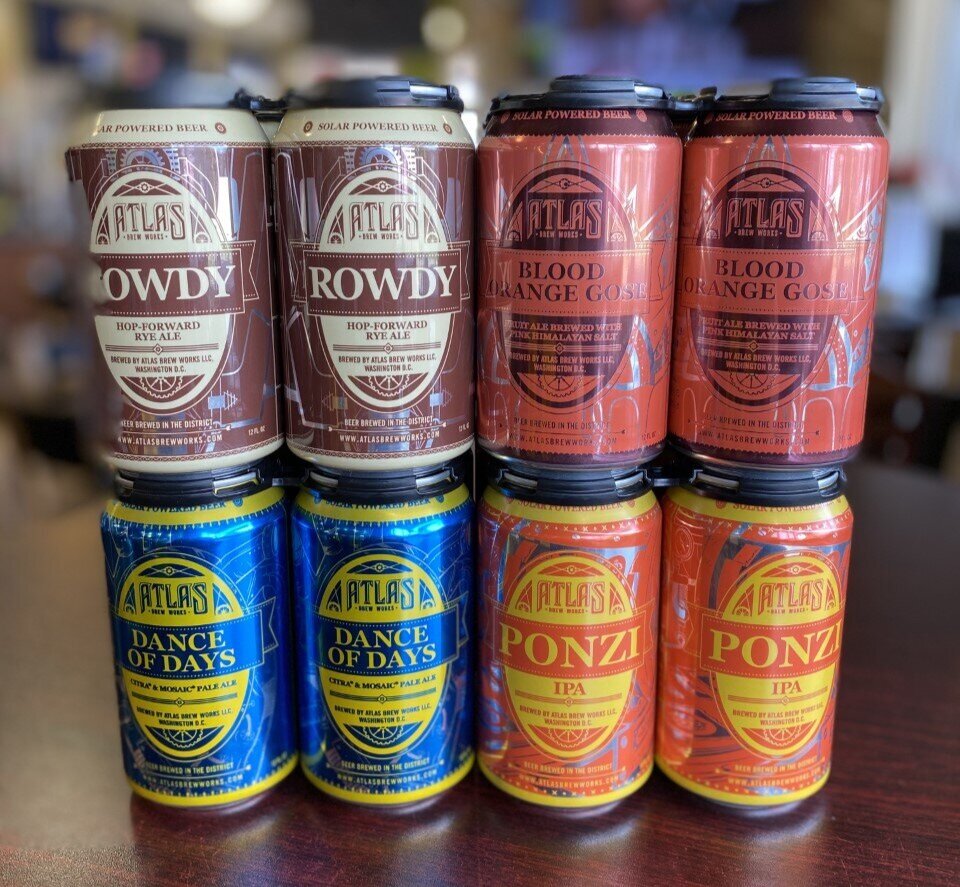 image credit: town center market
Despite being based out in Ivy City, Atlas Brew Works beers are easy to find on both restaurant menus and as cans in grocery stores around town. 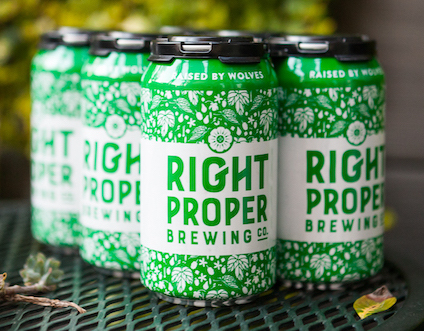 image credit: General Design Co
Not unlike Red Bear, Right Proper is easily accessed by metro, just off the Shaw/Howard U metro stop. They've got a killer restaurant menu and also sell cheeses and meats from local farms. Their popular "Raised By Wolves" IPA can design was done by none other than the talented folks General Design Company. 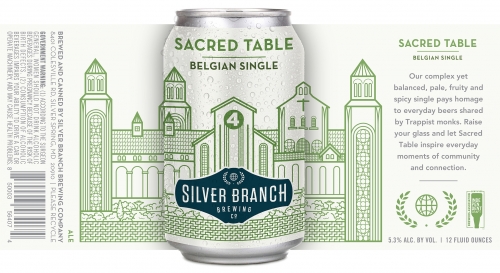 image credit: Silver Branch Brewing Co
Silver Branch opened just a year ahead of Red Bear with a can design that follows in the footsteps of DC Brau, Atlas, and Hellbender (heavy reliance on color). They're based up in Silver Spring, Maryland, and while that's far from downtown, they're easy to access via the Silver metro line (hence the name). 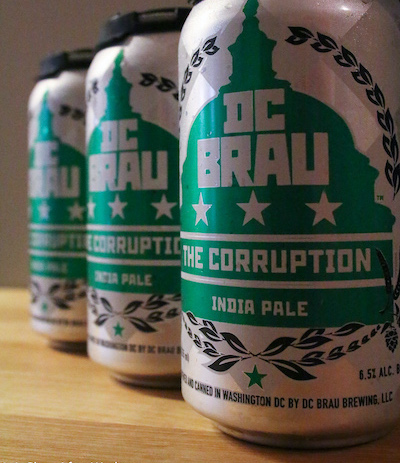 image credit: a glass after work
The first DC brewery to package their product, DC Brau's main brews come in iconic looking cans that feature the capitol dome. Their "corruption ale" can be found all over town, and their annual "Pride Pilsner" is a beloved summer drink. 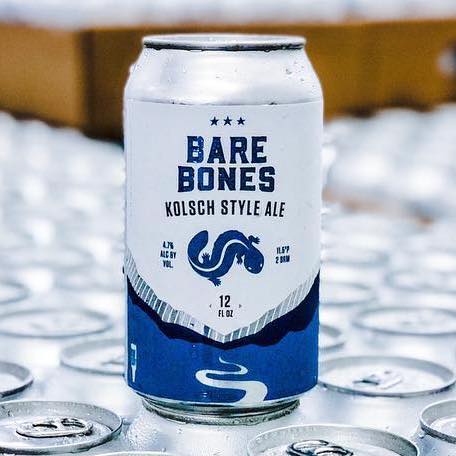 image credit: Hellbender Brewing Co
Hanging in West Hyattsville, Hellbender's cans use color in the same way that DC Brau and Silver Branch's main product lines do. And like Red Bear, their namesake is displayed in their logo (a hellbender salamander). 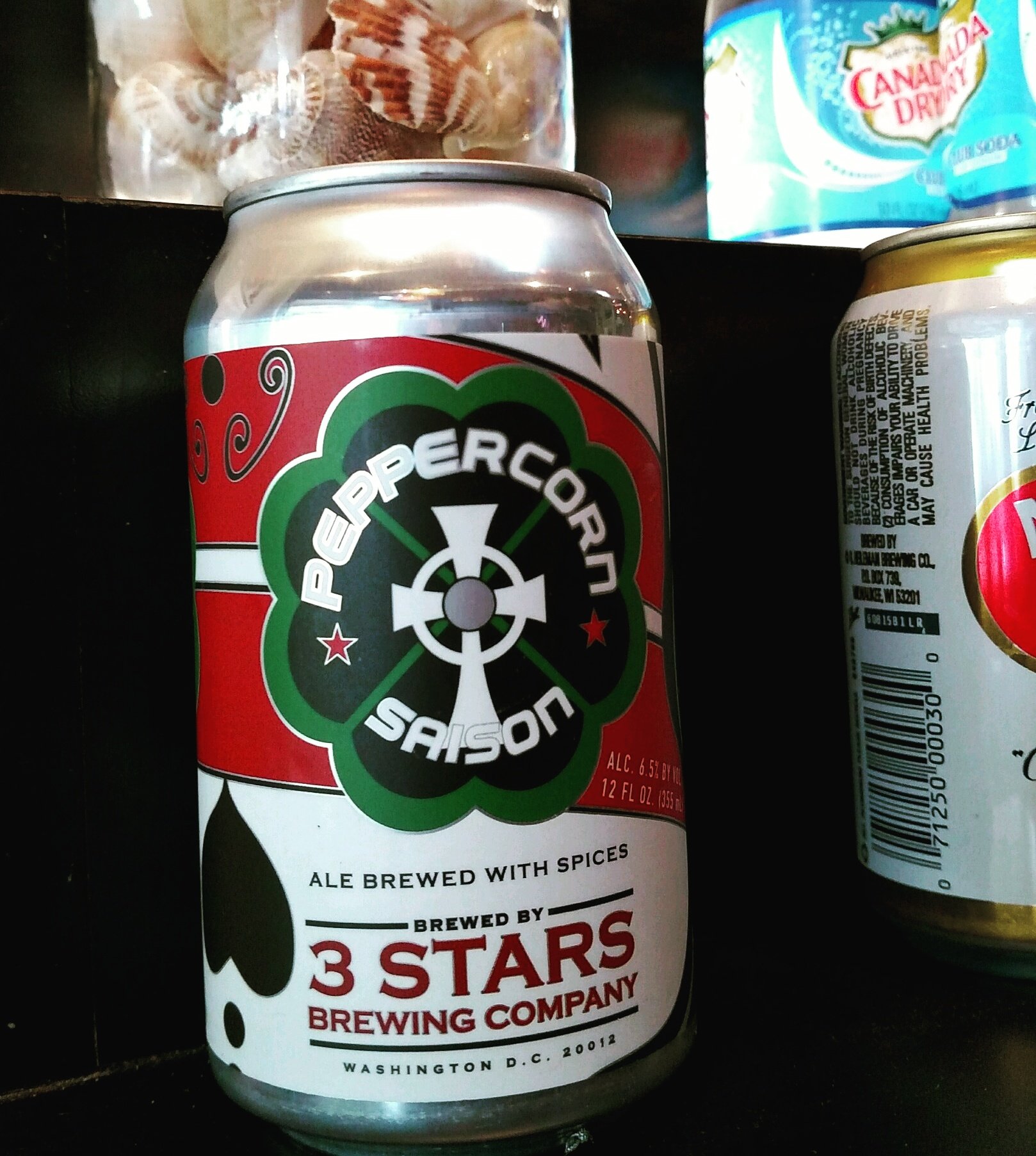 image credit: 3 Stars Brewing Company
Much like DC Brau, 3 Star is a well known brewery in the District and their can distribution game is strong in the city.

image credit: Crystal City Wine Shop
The only Virginia brewery I looked at, and also the only brewery on this list that is packaging their beer in bottles instead of cans. Like Hellbender, 3 Star, at Atlas, Port City may be physically far away, but their beers are easy find at the grocery store and familiar brand in DC.

Knowing where the competition stood and having identified some areas where Red Bear had opportunity to stand out, I began sketching. Even though we were starting with Red Bear's 51st State IPA and Tall Dark & Nutty sout, this was where I had to think about laying the groundwork for the visual style that all future labels would follow. I offered three different directions for Red Bear to choose from:

Silhouettes, which would have a very bold and simple typographic treatment for the beer titles with abstract textures and imagery housed in the profile of a bear head. Those textures and images would be based on the flavors and theme of the beer. I pitched this concept as the "middle of the road" option regarding how complex it would be for me to design, and how unique it would be for Red Bear. This rating was relative to the other directions: Habitats and Collage.

Habitats, where Red Bear's mascot, Ursula, would be placed in a scene based on the theme or flavor profiles of the beer. I explained that this would be the most complex design to create, but it would be highly unique artwork compared to other local beers.

Collage, which would feature Red Bear's logo and a series of small and simple images, stacked like Tetris blocks in the background. What's pictured in the collage would be dependent on the flavors and theme of the beer. The name of the beer would be positioned vertically (like on the spine of a book) with a solid color background colored to match the primary artwork. This concept was pitched as the "safe" choice that would be easiest to execute but still have the ability to stand out from amongst other cans. 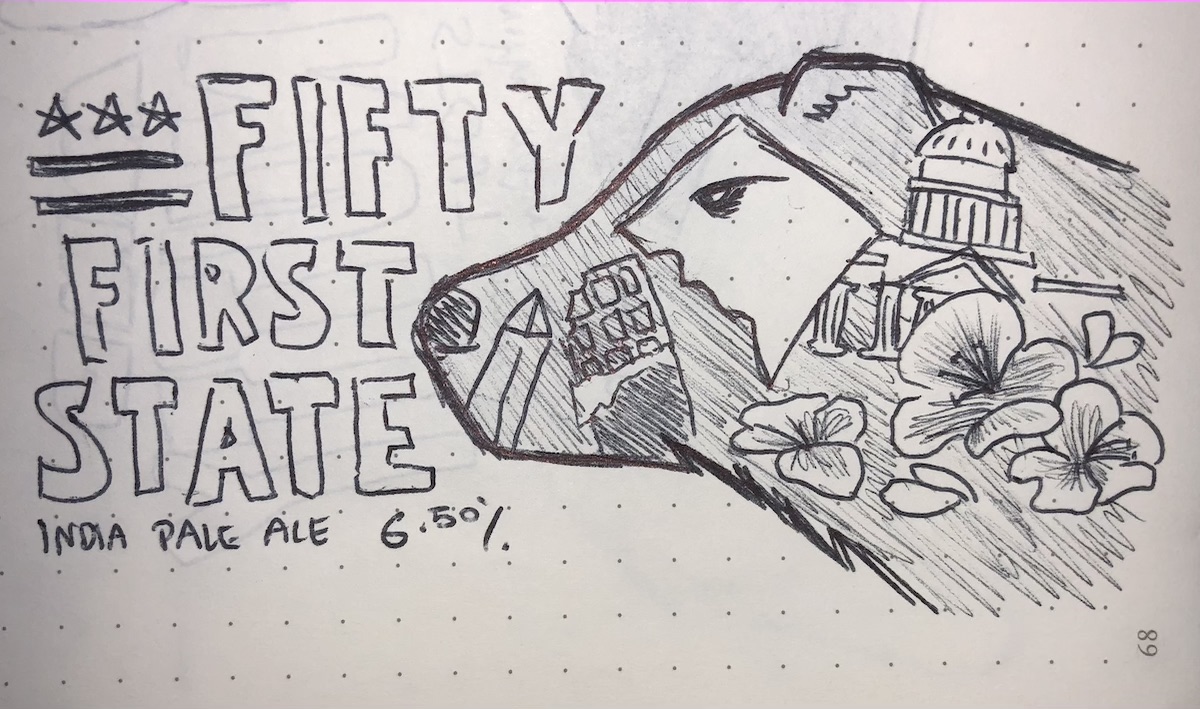 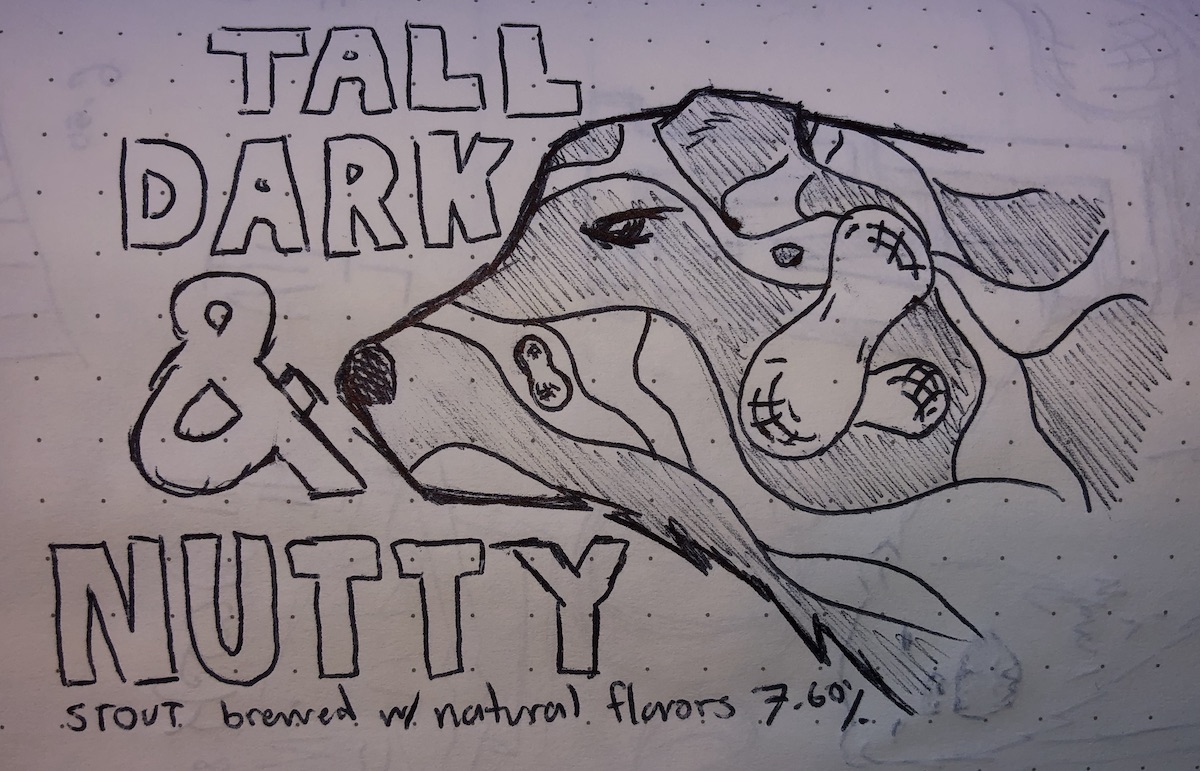 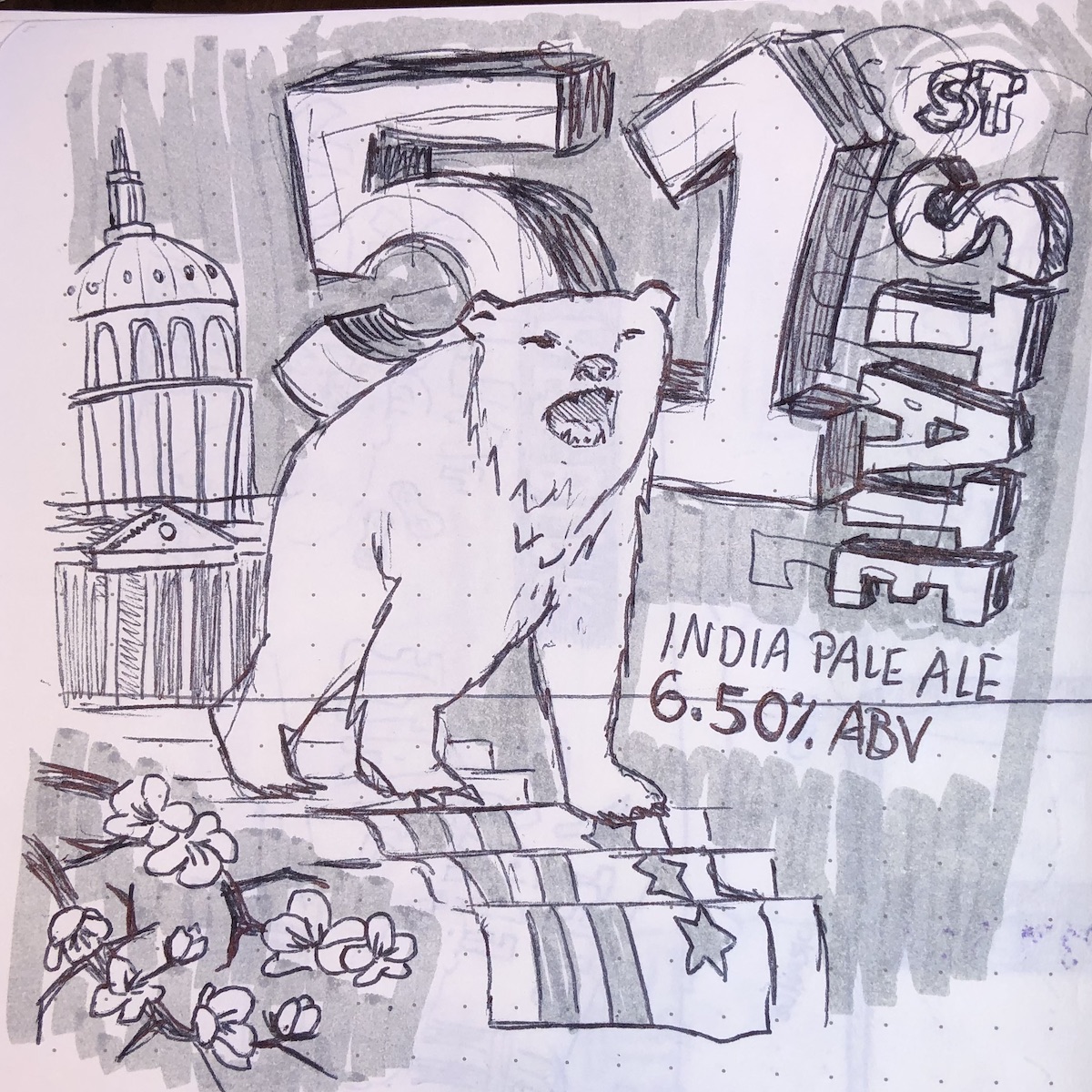 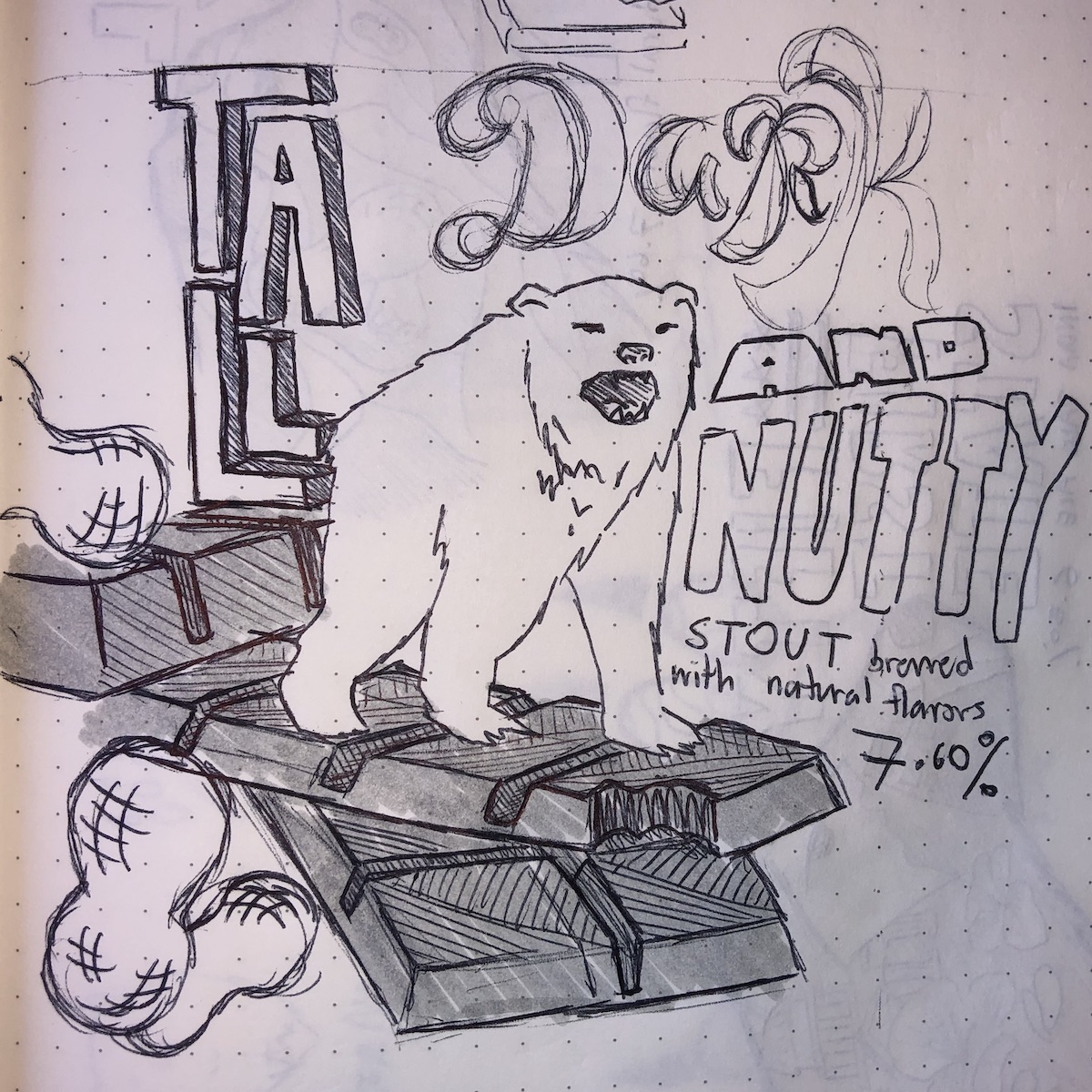 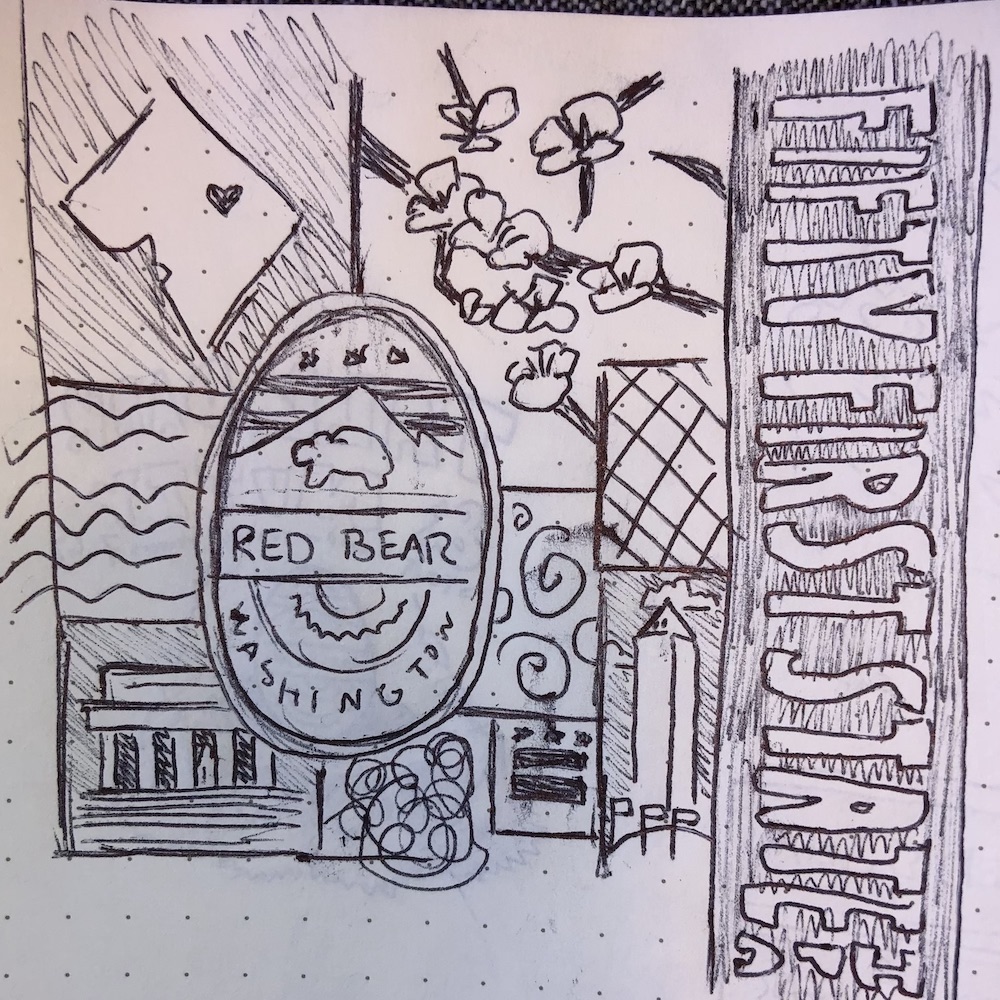 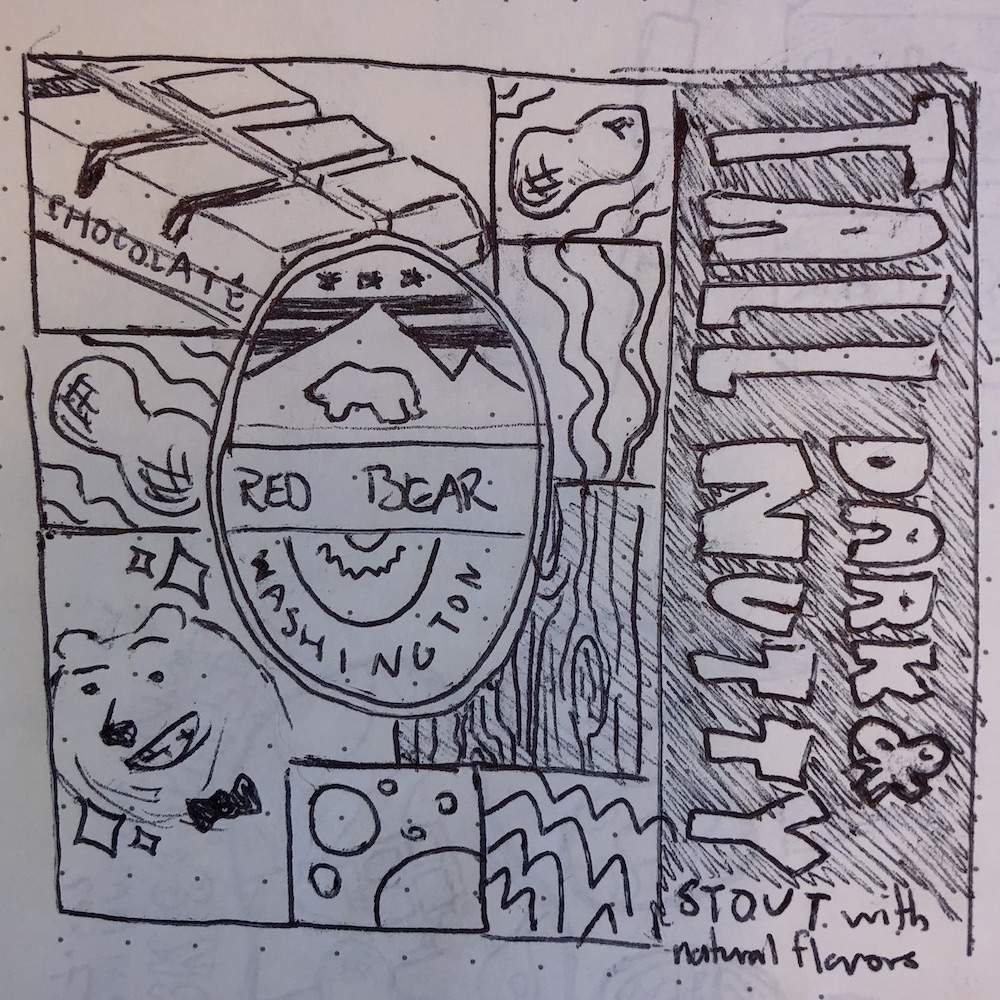 Despite the bears' wonky looking faces, they chose the "Habitats" concept! I was really excited about this because it would be the most challenging of the three to design, but also the most fun.

An element that we decided the "Habitats" concept should borrow from the "Collage" direction was the stripe of color. The team envisioned being to be able to compose various pride flags by lining up different combinations of their canned beers. They suggested having the stripe run horizontally around the top rim of the can, but I proposed that we keep the vertical position so it could take up a full "side" of the can with their name inside the stripe. This way they could stack cans vertically and build any pride flag at various scales. This color stripe became known as the "pride stripe."

As for what colors 51st State and Tall Dark & Nutty would be, we agreed that red made the most sense for 51st's pride stripe because the artwork was drawing on the fact that DC's state flag is red and white, and Red Bear is located on the red metro line. For Tall Dark & Nutty, with its intense peanut butter chocolate flavor, brown seemed to be the best option. After looking at all of the widely used pride flags, I determined that Red Baer would need to can a minimum of 12 different beers in order to have enough pride stripes to make as many pride flags as possible.

I told the Red Bear team I intended to draft with pen and paper for as long as I could considering how complex this direction was. The more refinement I could do with analog tools would save me hours in digital illustration. 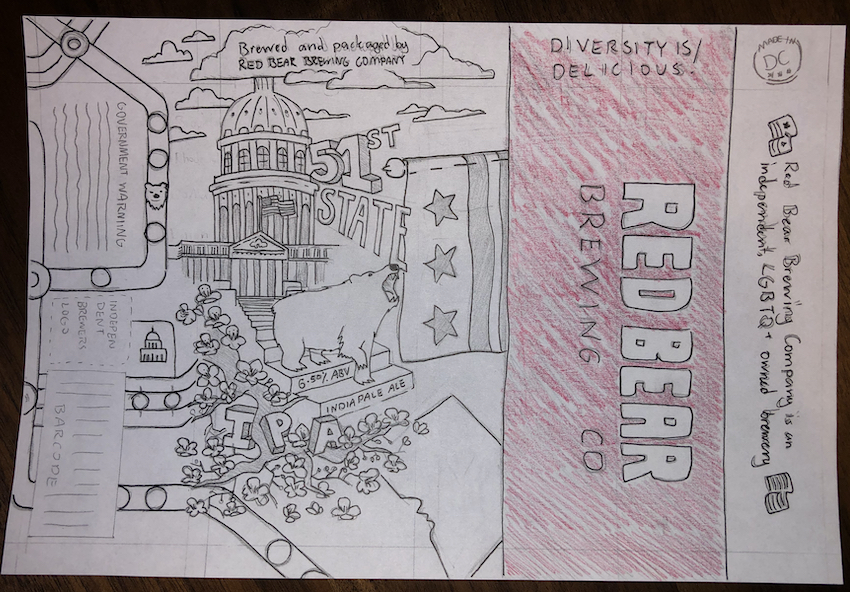 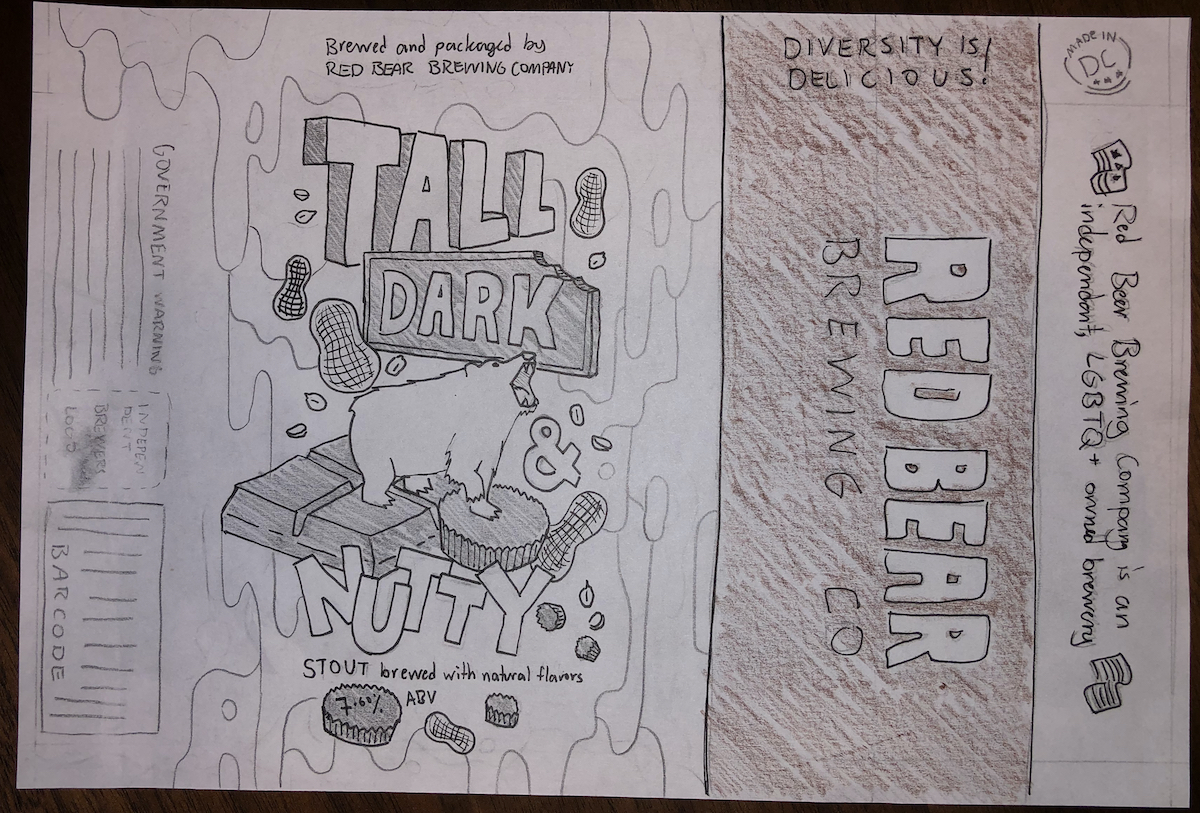 The Red Bear team decided they'd be canning in 16 ounce cans with shrink-wrap sleeves that ran nearly the full height of the can. I used the dimensions of the digital template from the label manufacturer so I could properly lay out the artwork within the "panels" of the can and understand how much room I had to work with. I ran down the block to the nearest 7-Eleven to get some 16oz sodas so I could see how exactly the label would wrap. This prototype was really valuable for both me and the guys at Red Bear to get a sense of how the artwork looked in a 3D space. 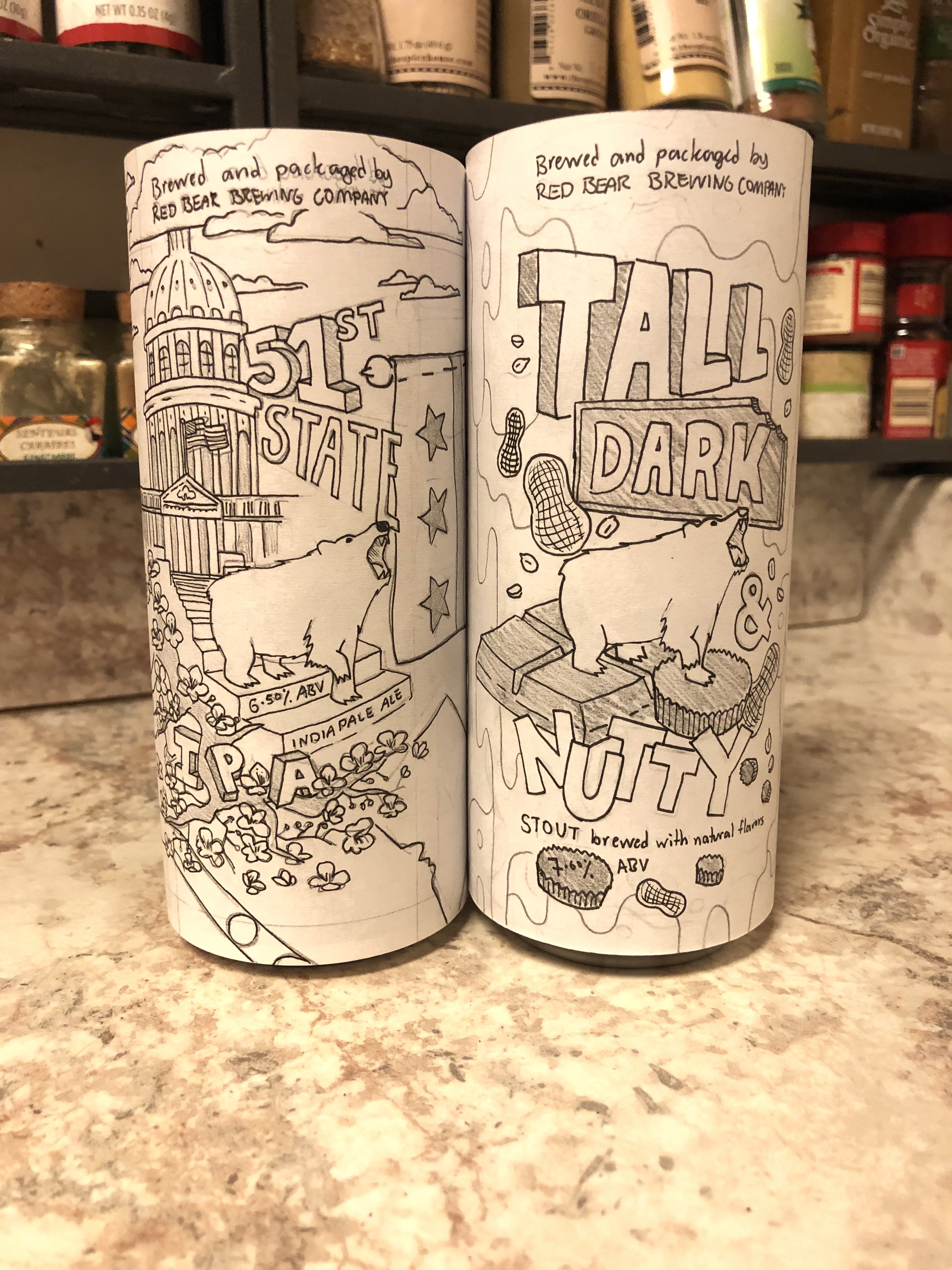 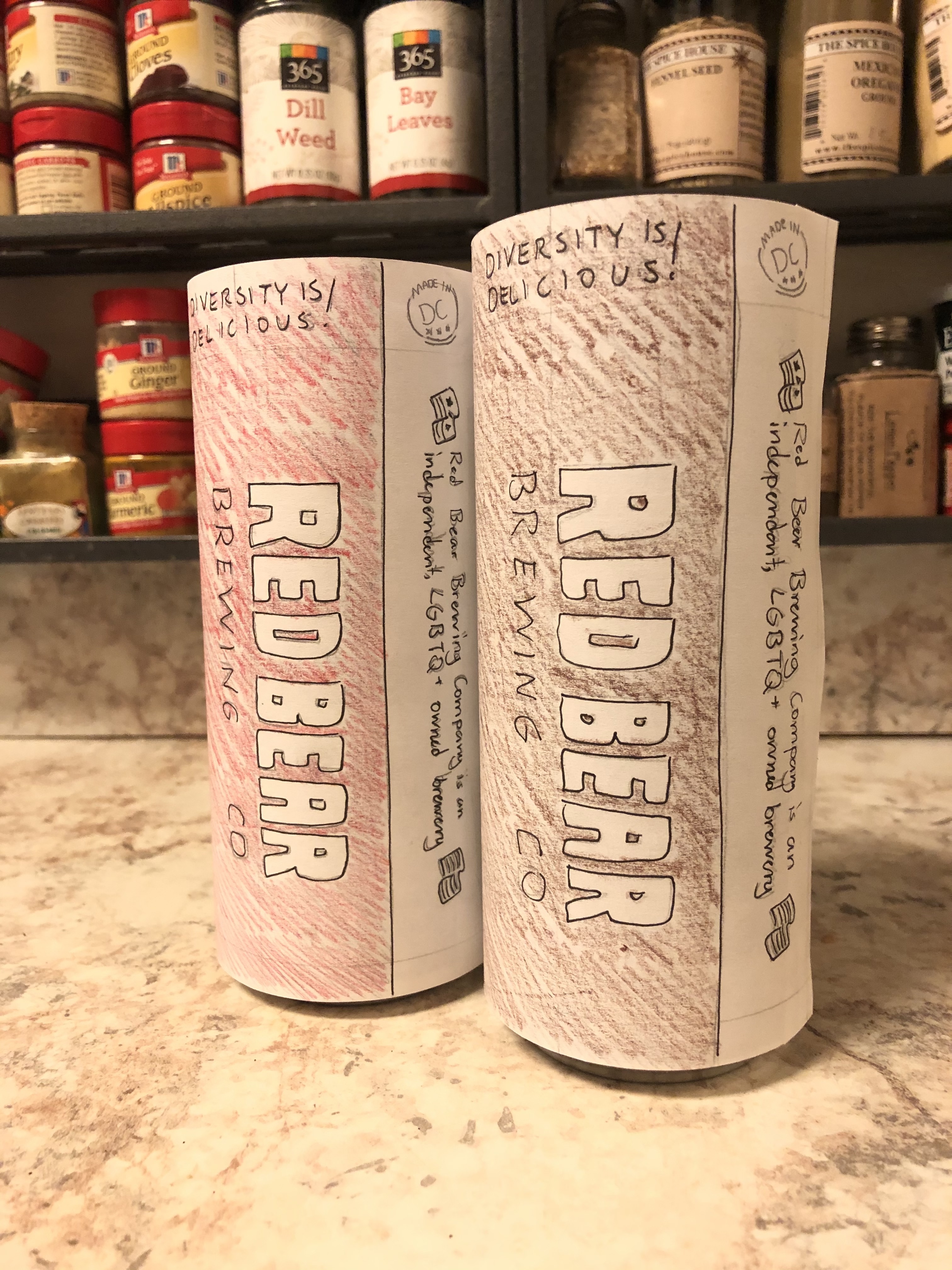 Once everyone agreed that the layout felt right, I moved into Illustrator. I started with 51st State knowing it would be the more difficult of the two cans to design (this was because it had more overlapping figures in its illustration).

If you compare the final artwork to the paper sketch, you'll notice some significant adjustments were made: the DC metro map shifted to wrap behind the main artwork and only includes the red line; the DC flag was moved and re-styled; and the ABV and beer-style text has been paired with the title rather than being part of the illustration. 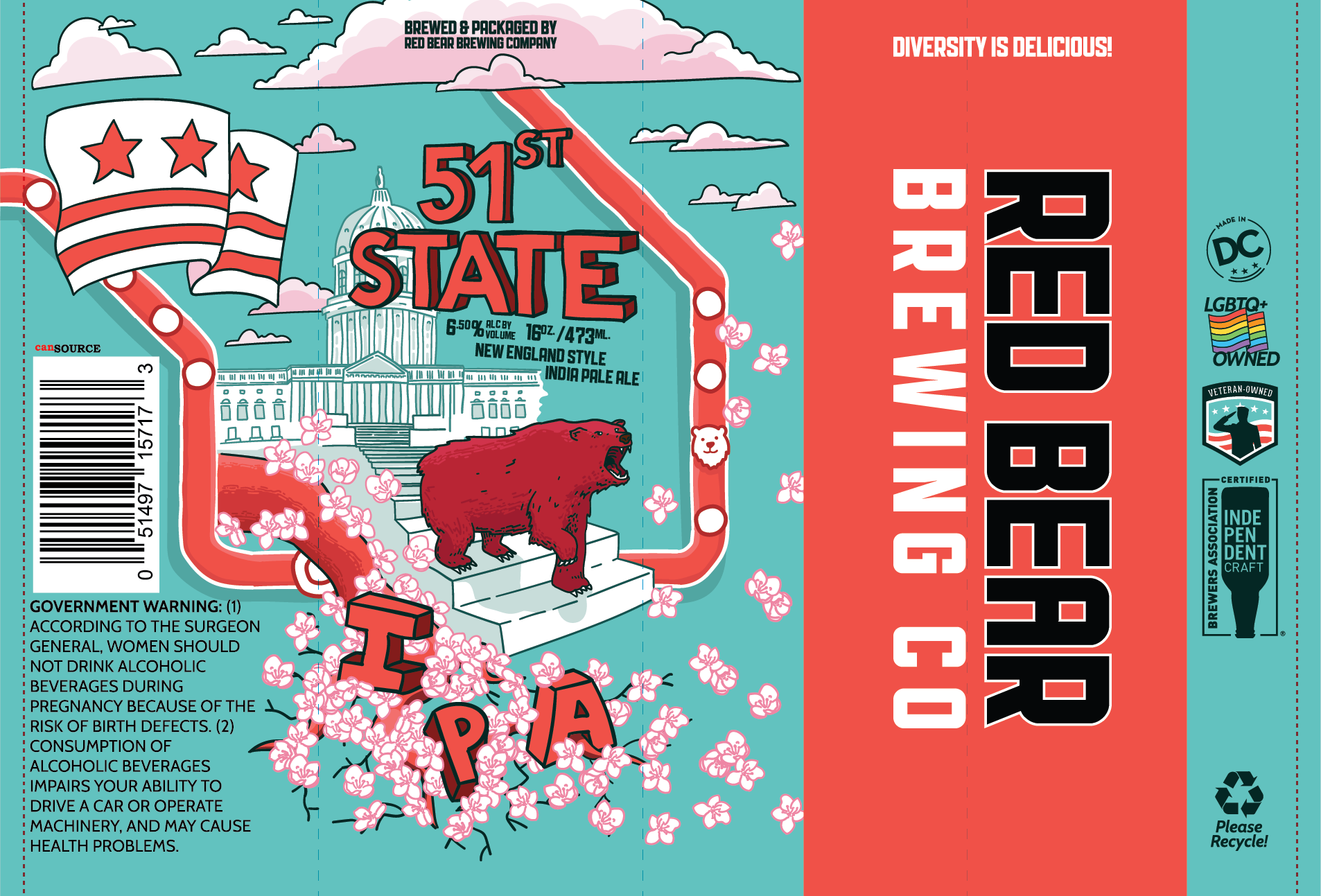 Tall Dark & Nutty was much more straightforward and had next to no major changes from the sketch. The biggest thing that needed adjusting with this one was the brown hues—when I initially showed this draft, I was using super dark, rich browns, but then realized those had to brighten up because the artwork would print darker than what is seen on a screen. 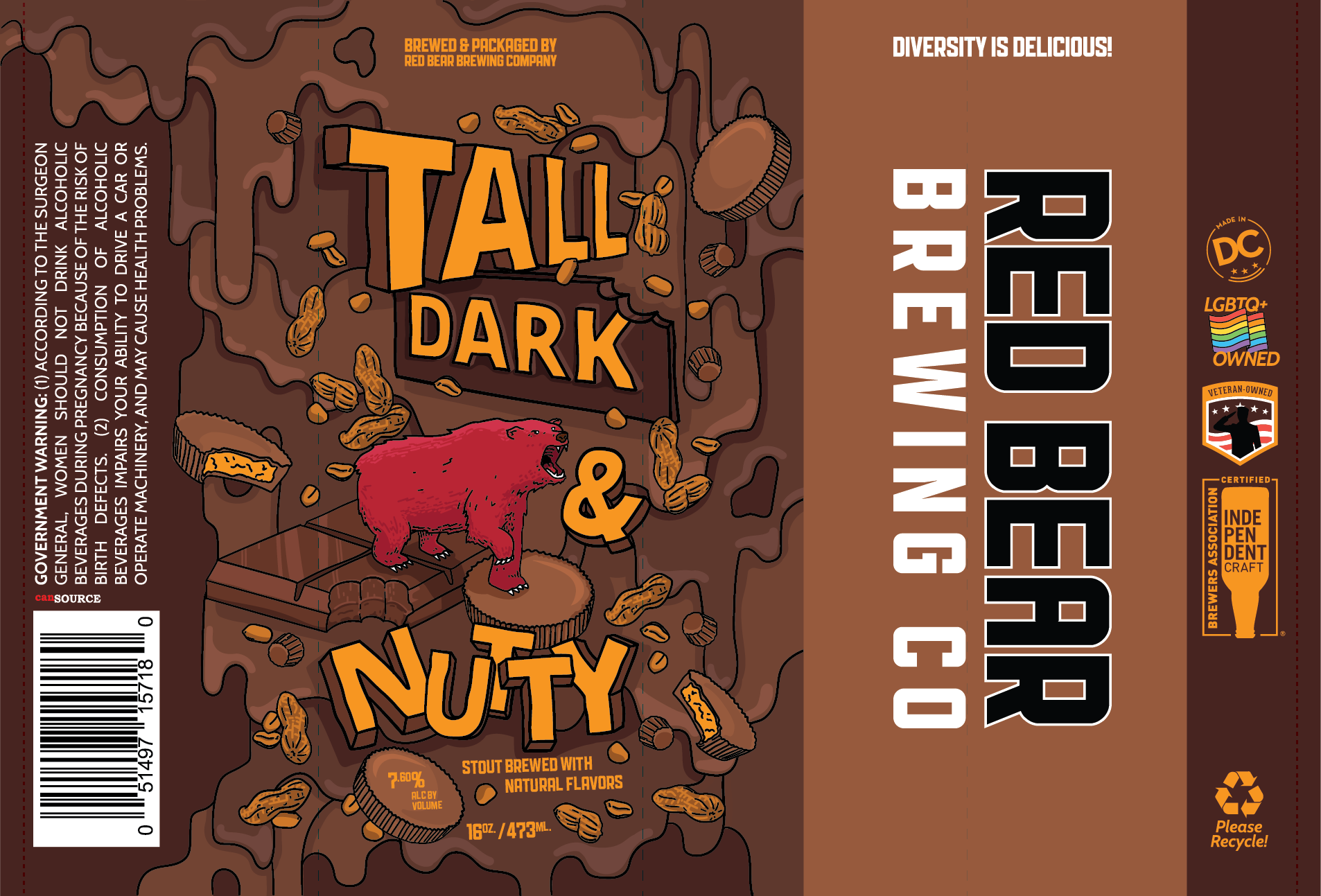 Just as we were about to wrap everything up and send the artwork off for printing, DC was starting to shut things down and advise folks to self-quarantine for the coronavirus. Bars and restaurants were allowed to stay open, but only if they offered pick-up and delivery orders. Red Bear had to be nimble and make some adjustments to their day-to-day; part of that meant switching from printing full height shrink-wrapped labels for 16oz cans to a standard 12oz labels because they were able to get them three times faster. They asked if I could reformat 51st State label, "of course," I said, "I'm ready to roll with the punches right alongside you guys!"

The 12oz cans printed in a matter of days, and Red Bear was ready to send out 6 packs for delivery and pick-up to all the thirsty folks in quarantine. 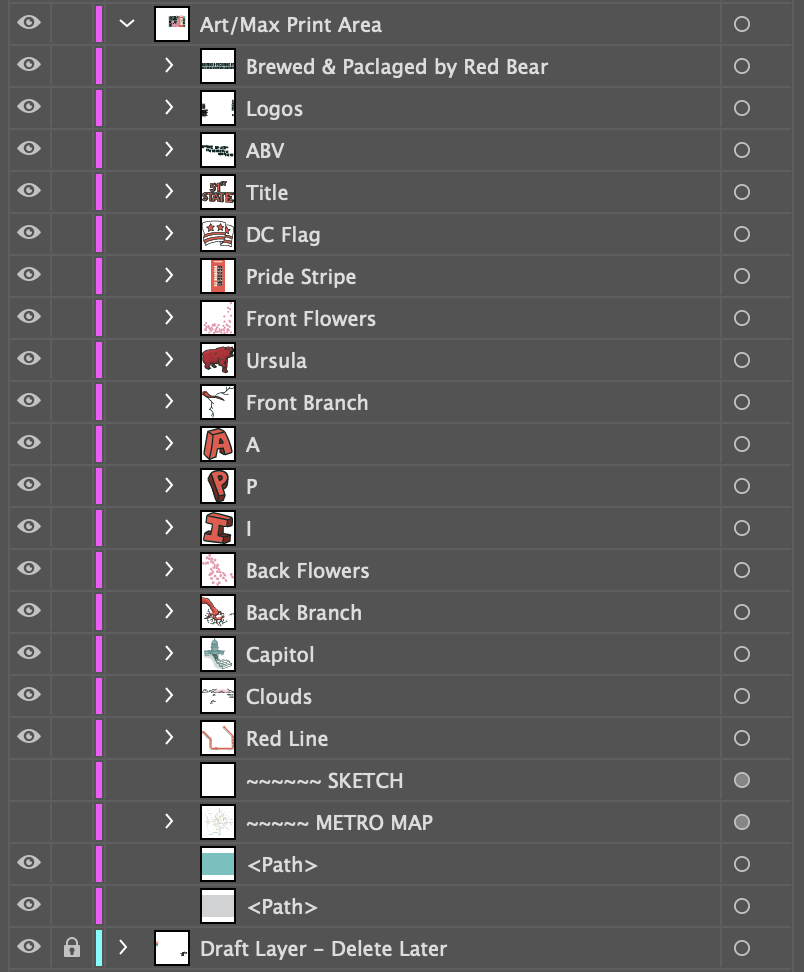 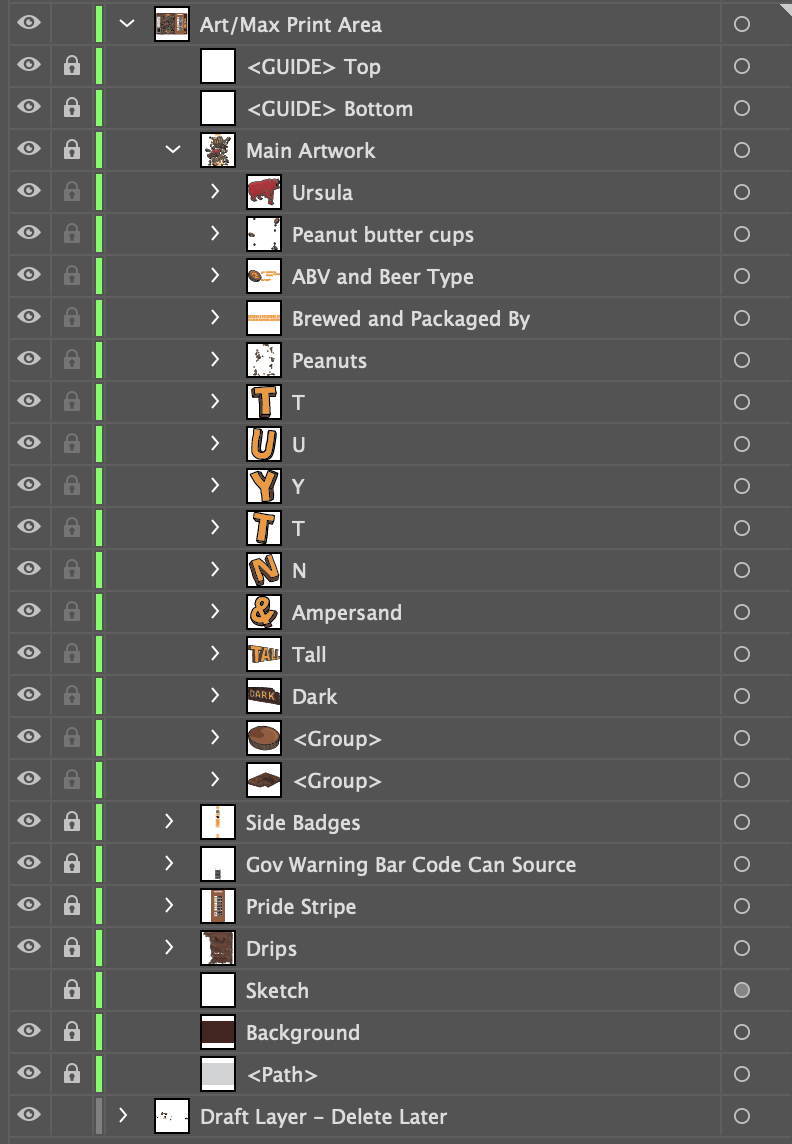 The 12oz cans printed in a matter of days, and Red Bear was ready to send out 6 packs for delivery and pick-up to all the thirsty folks in quarantine.

And they were a hit! The cans issued a fantastic response from patrons, and Red Bear was ready to move on with not only more beer labels, but seltzers as well! I'll continue to update this case study as new beers roll out. 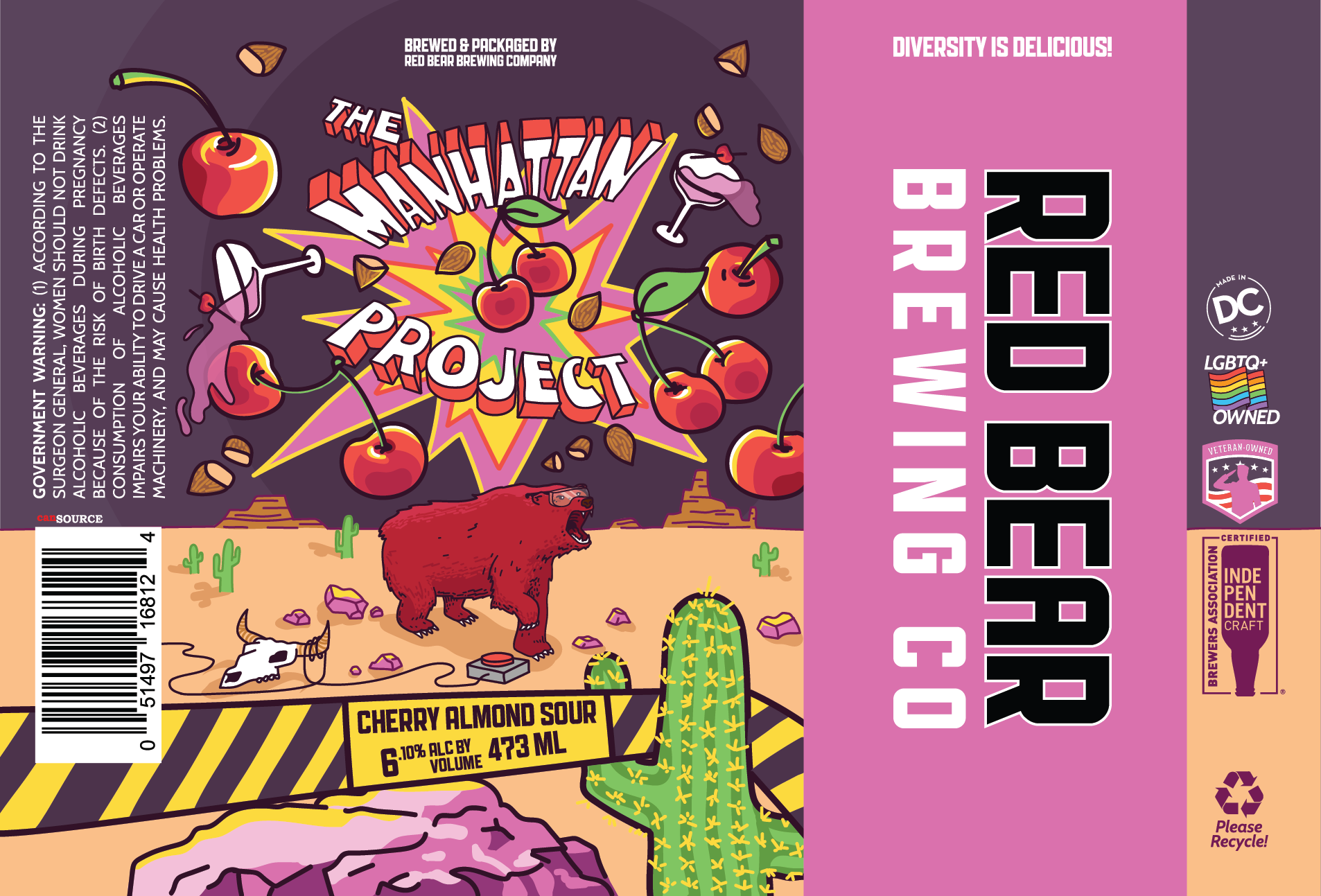 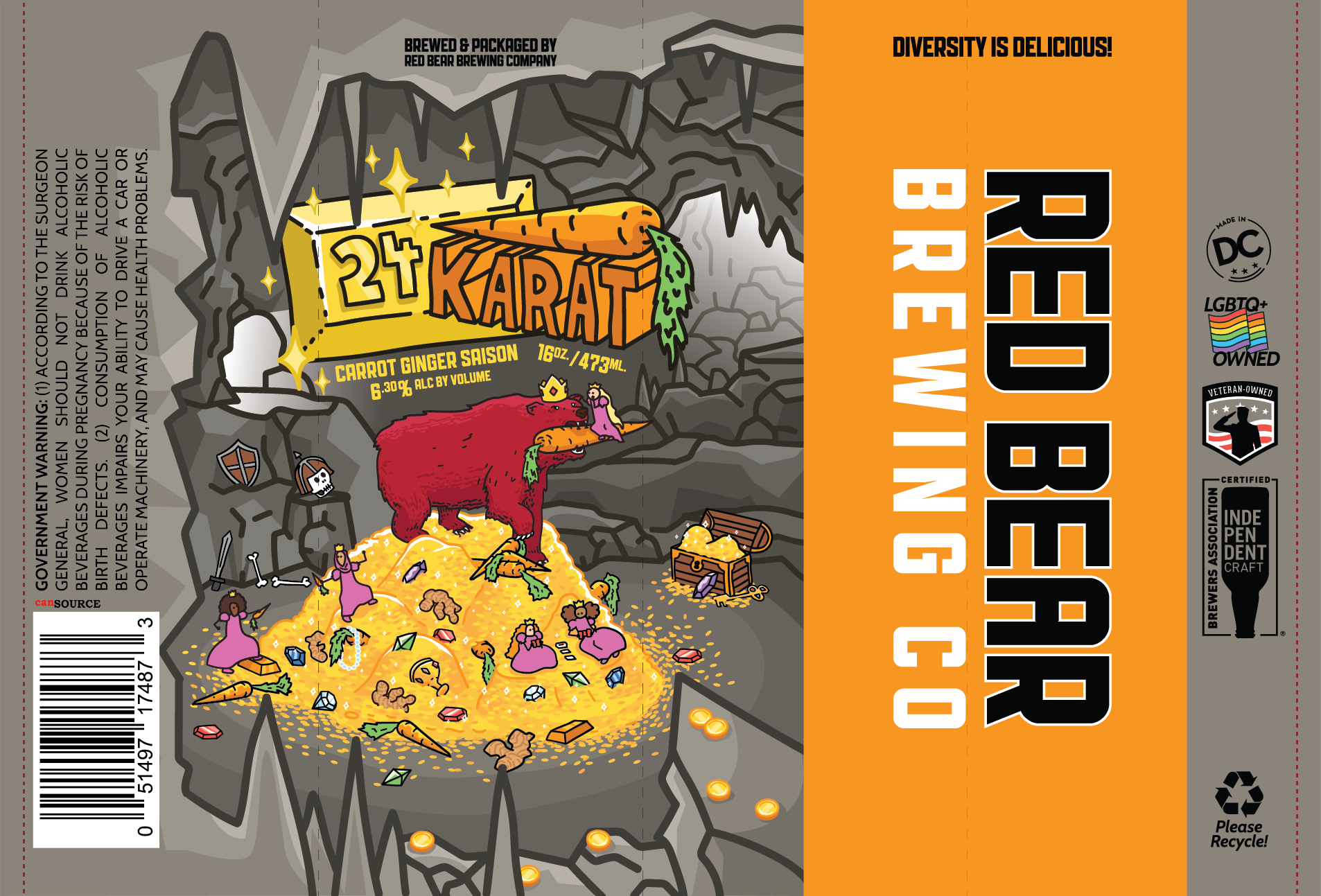 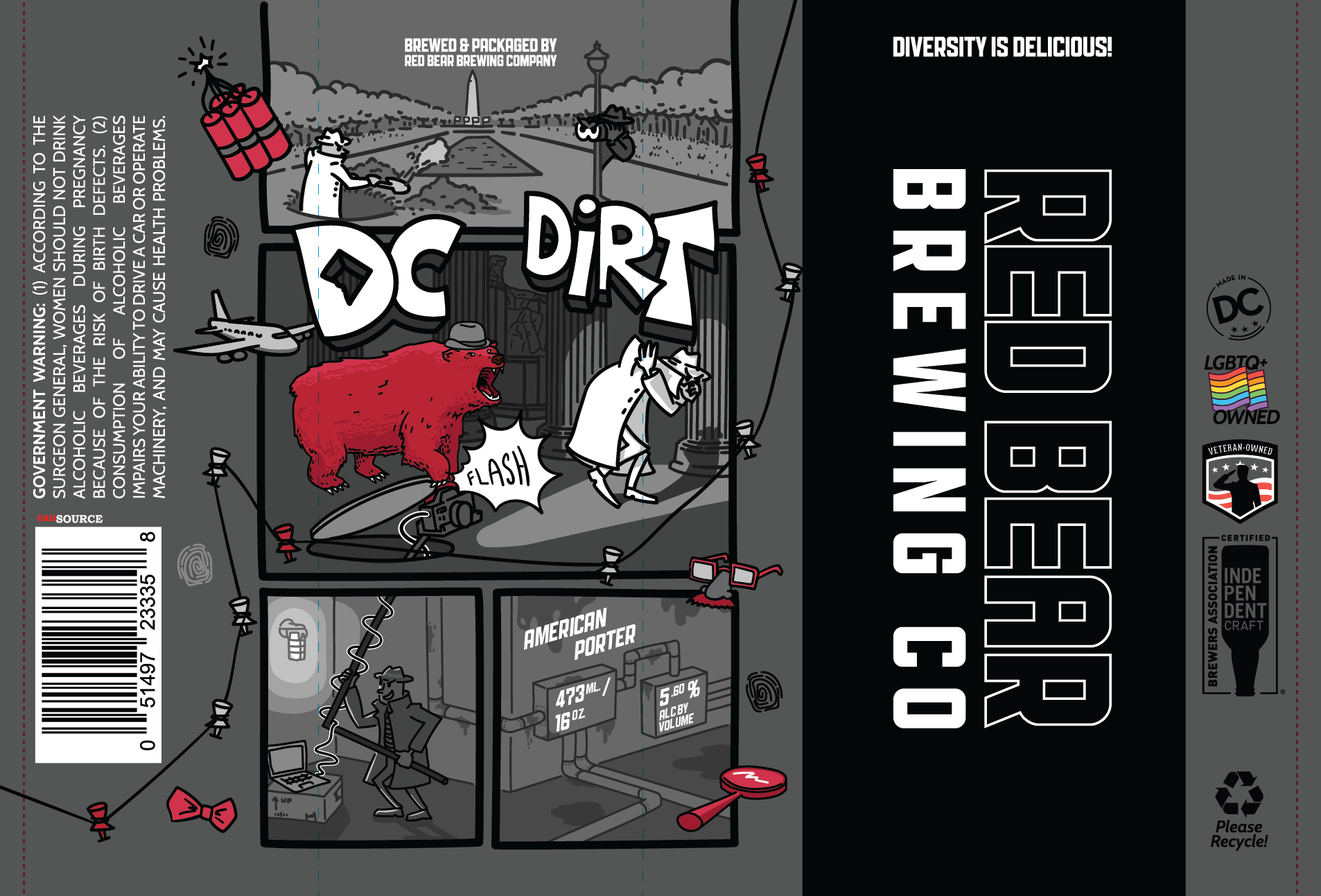 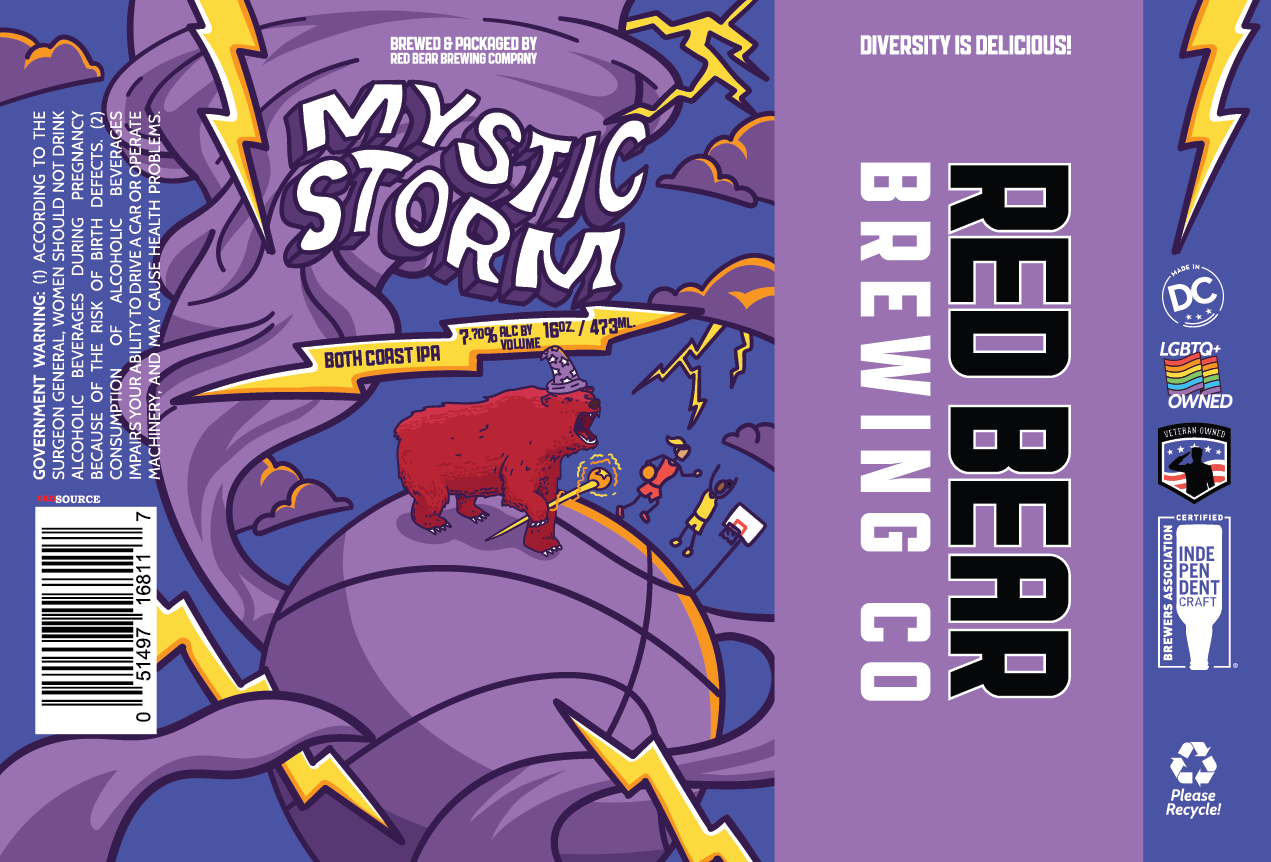 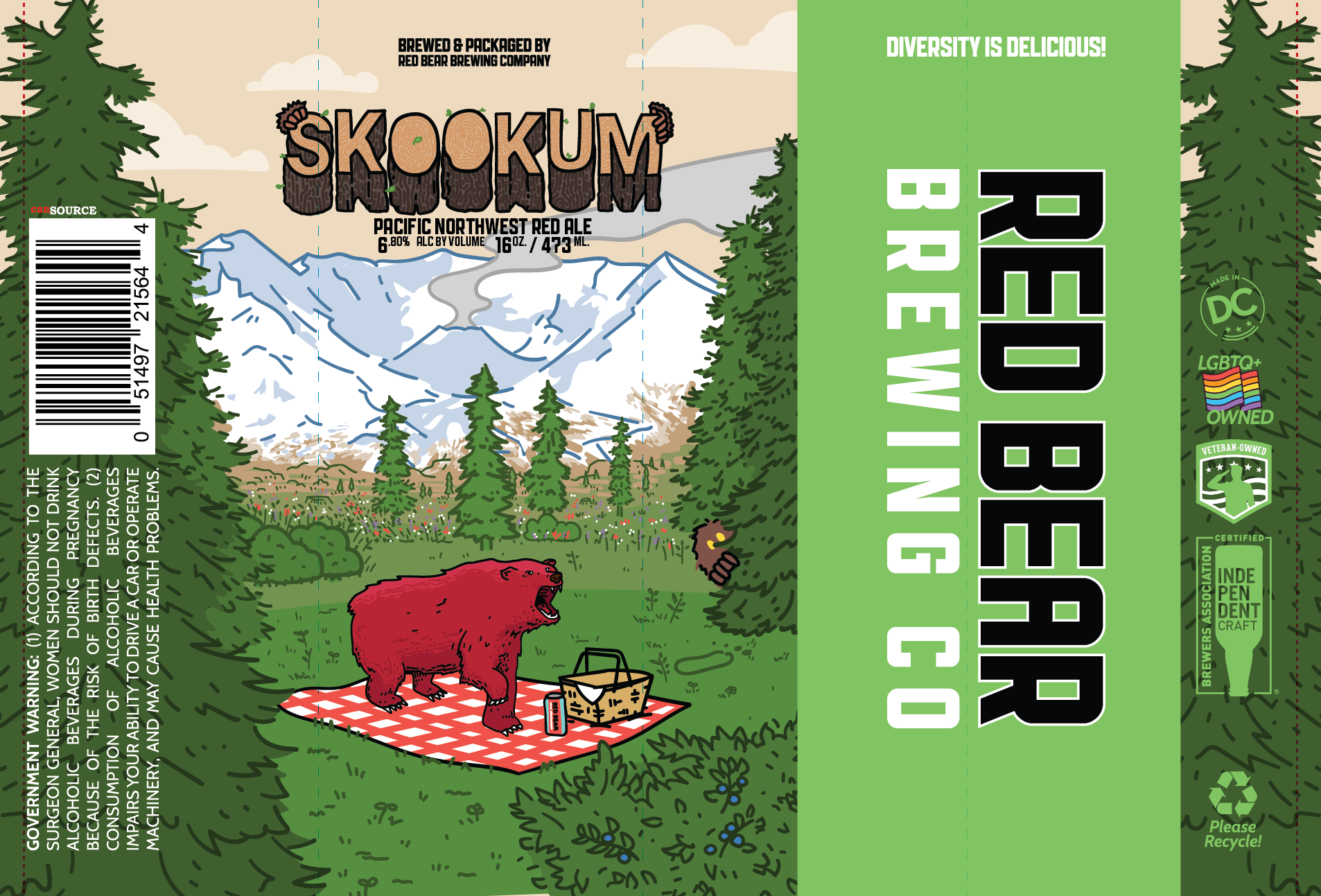