Thanks for reaching out! I'll be in touch soon.
Close
Yikes! Looks like the form is busted. Check back later, or try getting in touch with me on twitter
HomeProjects >Blog
TwitterInstagramLinkedInContact Form
Close
Red Bear Brewing CompanyIllustration CollectionLogo Collection
< Go Back
Close
HomeProjects >Blog
TwitterInstagramLinkedInContact Form
Close

Illustration and drawing are skills I've never received formal training for, but I'm always excited about the chance to practice them. I have a lot of respect for folks who do this type of work full time, and I'm always humbled by the amount of time and effort it takes to illustrate anything.

This collection ranges from drafts that didn't make the cut (but I wanted them to see the light of day beyond Dropbox), or full pieces that are out there in the world somewhere. 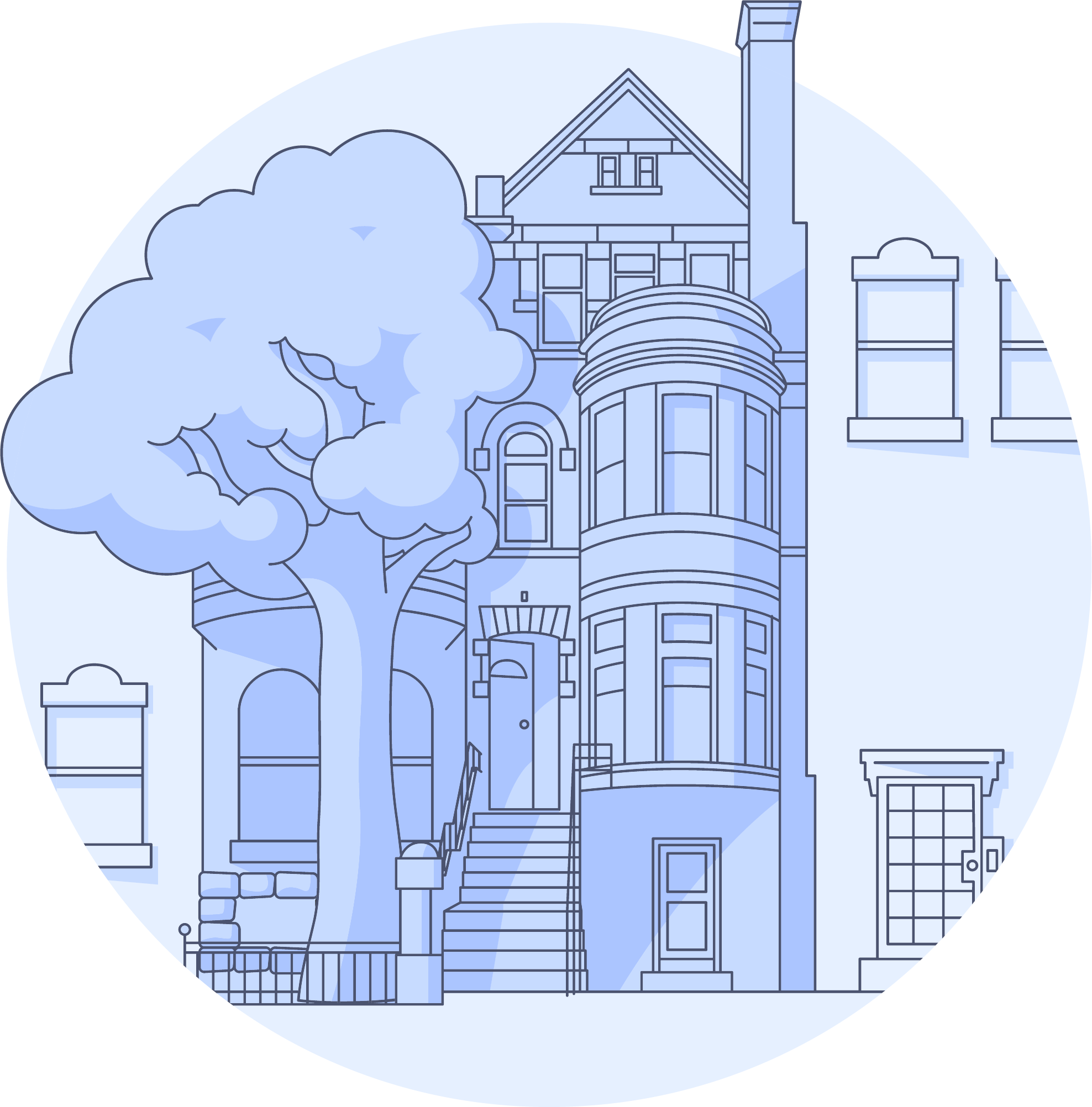 Designed at, and for: Brunch Digital

When our team was in the process of redesigning our main website, I suggested we add some personality to the mega-menu we were designing. Something that felt personal, but not cheesy. Since this would live next to some general contact information, I decided a simple illustration of our new office building would be both cute and useful. We've also discussed animating the illustration and hooking it up to a weather API so if someone were to visit the site on a rainy day, it'd be raining in the illustration too. That meant I had to set up the layers in the illustration in a way that could handle those sorts of visual changes.

This illustration has also made a few appearances on social media and printed materials. If you want to see it in action, open up the menu atbrunchdigital.com

JTT asked us for big campy energy in a poster design to promote a Tea Dance they were hosting with some local bars in late 2018.

Originally we had grand ideas for an elaborate photoshoot mimicking Flemish still-life oil paintings that contained easter eggs if you looked closely enough: bottles of poppers hidden in fruit bowls, a jock strap instead of a cloth napkin...etc.

Unfortunately we only had three days to complete the design and figured it'd actually be faster to illustrate the entire thing than gather the props and set up a whole shoot. The biggest challenge for this one was figuring out how to draw a LOT of legs. I used a reference photo of what I believe was a middle school dance scene to get the positioning and scale looking right. What these legs were wearing was important too, it was an opportunity to provide context of who all would be at a Tea Dance. Things like booty shorts, knee high striped socks, and converse for kickball players; boat shoes and fitted shorts and jeans for a classic "I live in DC and regularly go to brunch" look.

Looking back, I wish I had the time to push this further regarding decorative elements. I think the "easter eggs" idea from the photoshoot would still be successful in this design. My goal for this poster was to make it something that folks would want to steal off the street for themselves; to make it more memorable than a simple promotional poster. 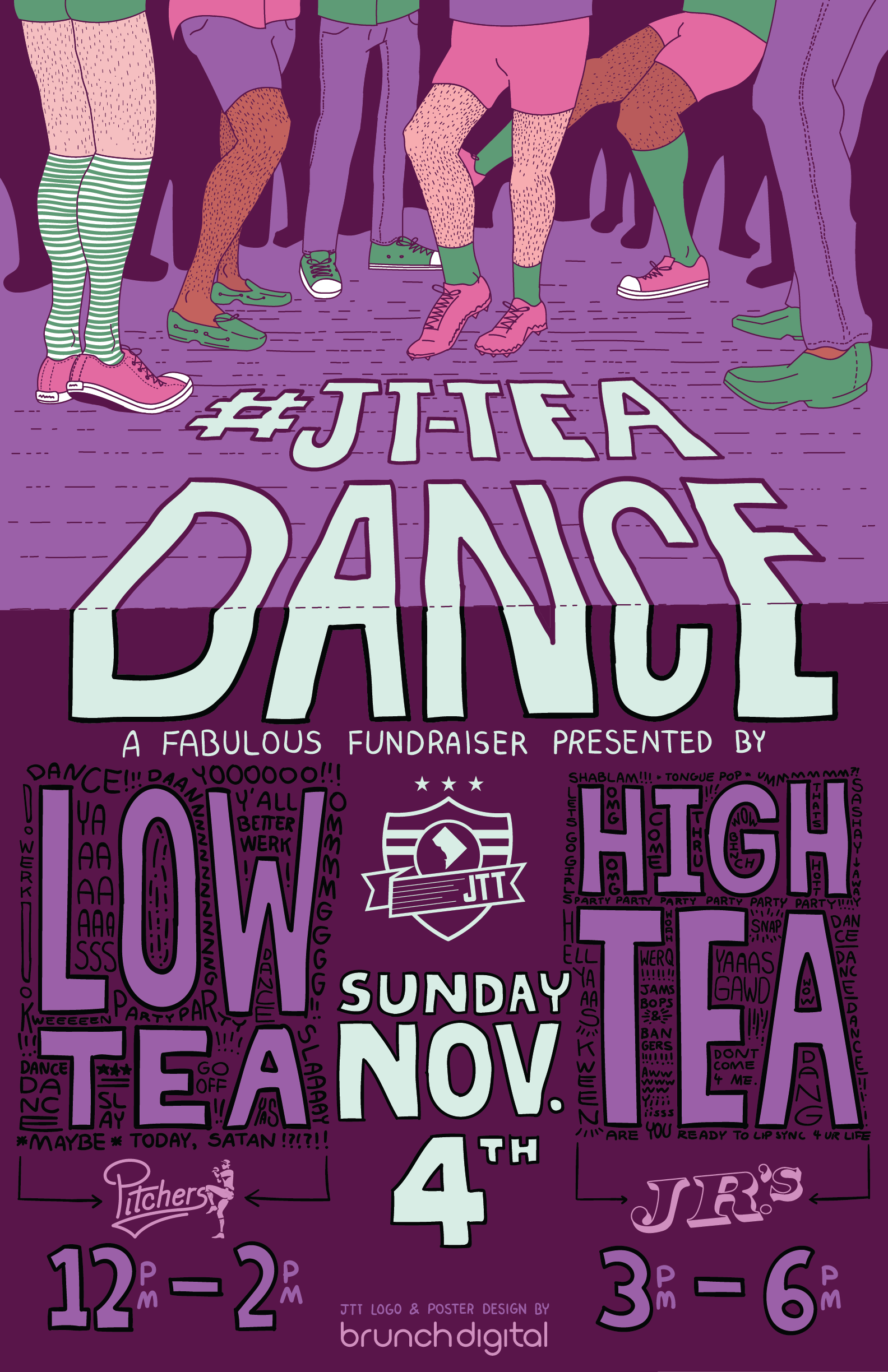 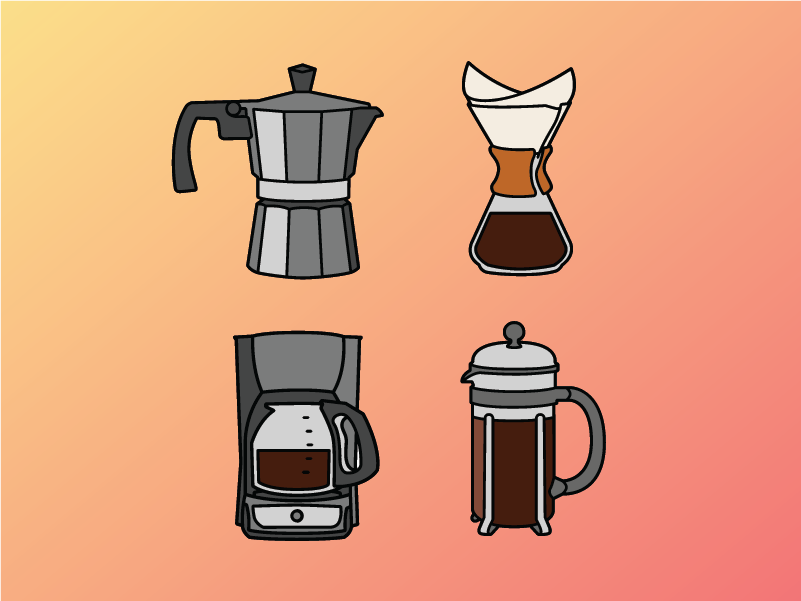 I'm really into this resurgence of enamel pins we're seeing in the DIY and creative communities. Not only are they wearable accessories, but they're fun collectables. For me, pins are like a grown-up version of Pokemon cards.

Every now and then I'll think of something I'd like to own in pin-form, then google it, but then find myself disappointed in the selection. Strangely enough, coffee makers are something that there aren't a lot of! I decided to design my own set of four brewing apparatuses: a stove-top moka pot, a pour over, a classic drip, and a French press. I haven't sent them to get cast as molds for pins yet, but it's something I'm saving up for.

When our team at Brunch was in the middle of re-branding from JEL Creative, we explored the idea of using illustration in our visual identity. One possible application was replacing traditional photo headshots with illustrated ones. This would make it easier to get consistent portraits of new hires on the site, even if they were remote.

Although it took longer to draw each person and get their faces looking "right", I didn't want to simplify our portraits down into cartoonish icons. For a larger company that might make more sense, but for a boutique web design firm with a team of seven full-time folks, I wanted these to feel as unique as a photograph would be. No recycled nose shapes, mouths, or accessories. The shadows actually ended up being the most important part of "personalizing" each persons' face: only then can you see how deeply set someone's eyes are, and you can better understand the curves and shape of their head. 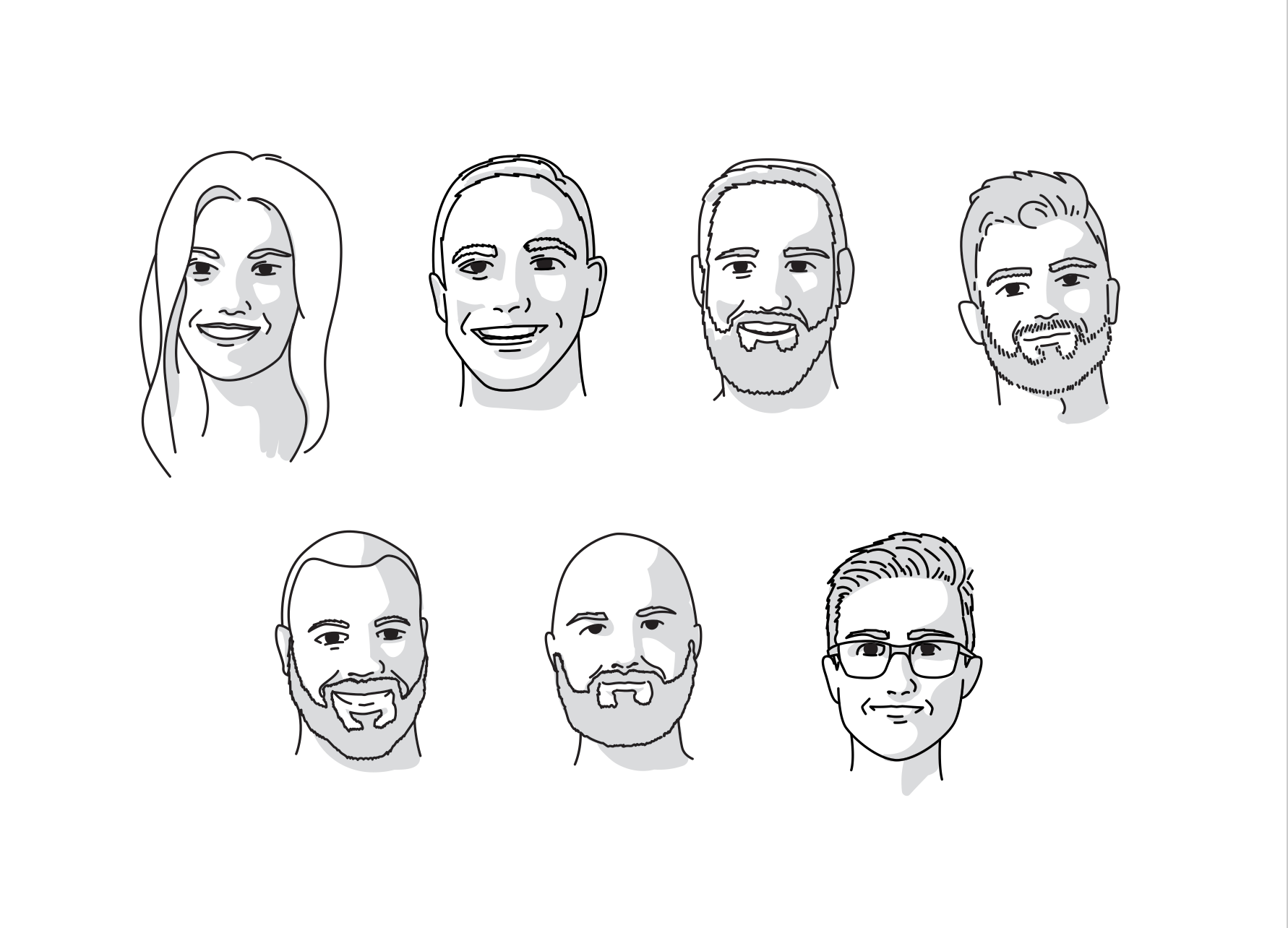 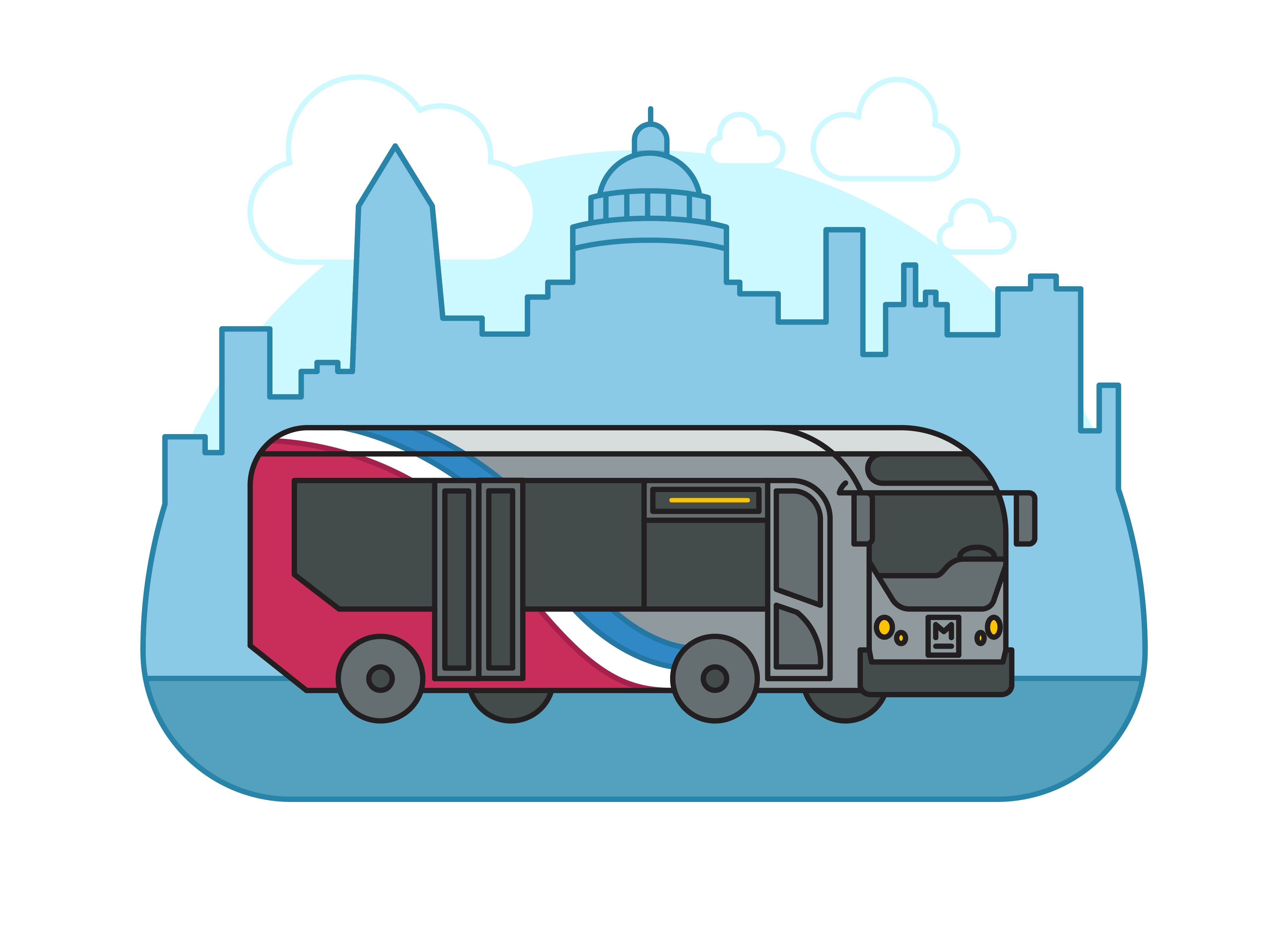 There was a period of time in late 2018 when the DKNG guys were posting a ton of time-lapse videos of their illustration process on instagram. I was obsessed. To me the thought of recording your whole process and posting it for the world to watch felt revealing and scary, but I also really wanted to try it. I chose to use a DC Metro bus as my test subject. End to end, it took about an hour to finish the structure of this piece, and then I spent a little longer tinkering with the colors. You can view the time-lapse of that illo over on instagram.

I plan to revisit this one and add in more details. A style that I was inspired by comes from Yegor Meteor.