Thanks for reaching out! I'll be in touch soon.
Close
Yikes! Looks like the form is busted. Check back later, or try getting in touch with me on twitter
HomeProjects >Journal
TwitterInstagramContact Form
Close
Red Bear Brewing CompanyGraham Capital Wealth ManagementAccenture Federal ServicesIllustration CollectionLogo Collection
< Go Back
Close

Red Bear Brewing Company opened in early 2019 in the NoMa neighborhood as Washington DC's first 100% gay-owned brewery. Founders Bryan, Cameron, and Simon hail from Seattle and are on a mission to bring west coast adventure culture to DC's beer scene. With support from my team, I illustrated, designed, and produced a wide range of deliverables that live on the web, on paper, and on glass.

Red Bear had basic visual branding in place (a logo system and color palette), but no dedicated creative team to help them produce collateral they needed to get up and running. They asked Brunch for t-shirt designs not only for their staff, but also as rewards for backers of their Kickstarter campaign. We also set them up with a Squarespace website and content strategy that will grow alongside the brewery. Our team also directed a photoshoot specifically for their website imagery. As they approached their first summer, Red Bear asked us to develop a promo campaign for Pride week with diversity as the main theme. This campaign manifested as limited-edition beer glasses, new staff and merch shirts, digital promo assets, and posters advertising Red Bear's events for DC Pride.

My roles and contributions 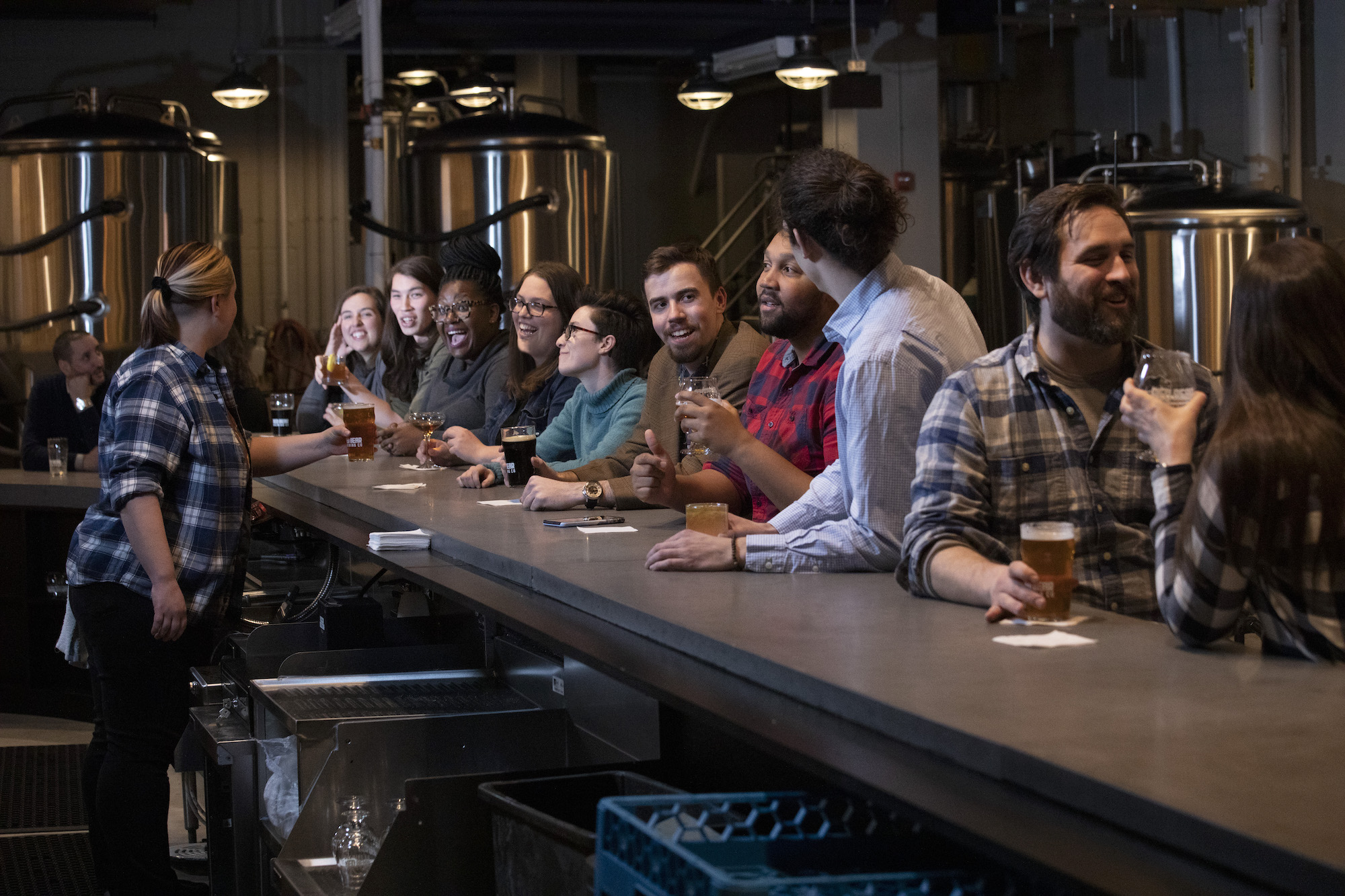 The first thing they needed were custom illustrations to use on staff shirts, on Kickstarter exclusive tees, and to be printed on growlers. They were looking for something that had a touch of humor, and was a cool looking graphic that folks would want.

I presented 5 rough sketches that varied in humor, visual complexity, and range of style. They chose a design depicting Ursula, their mascot, roaming amongst the DC monuments set in a woodsy northwestern scene for their official staff shirts. 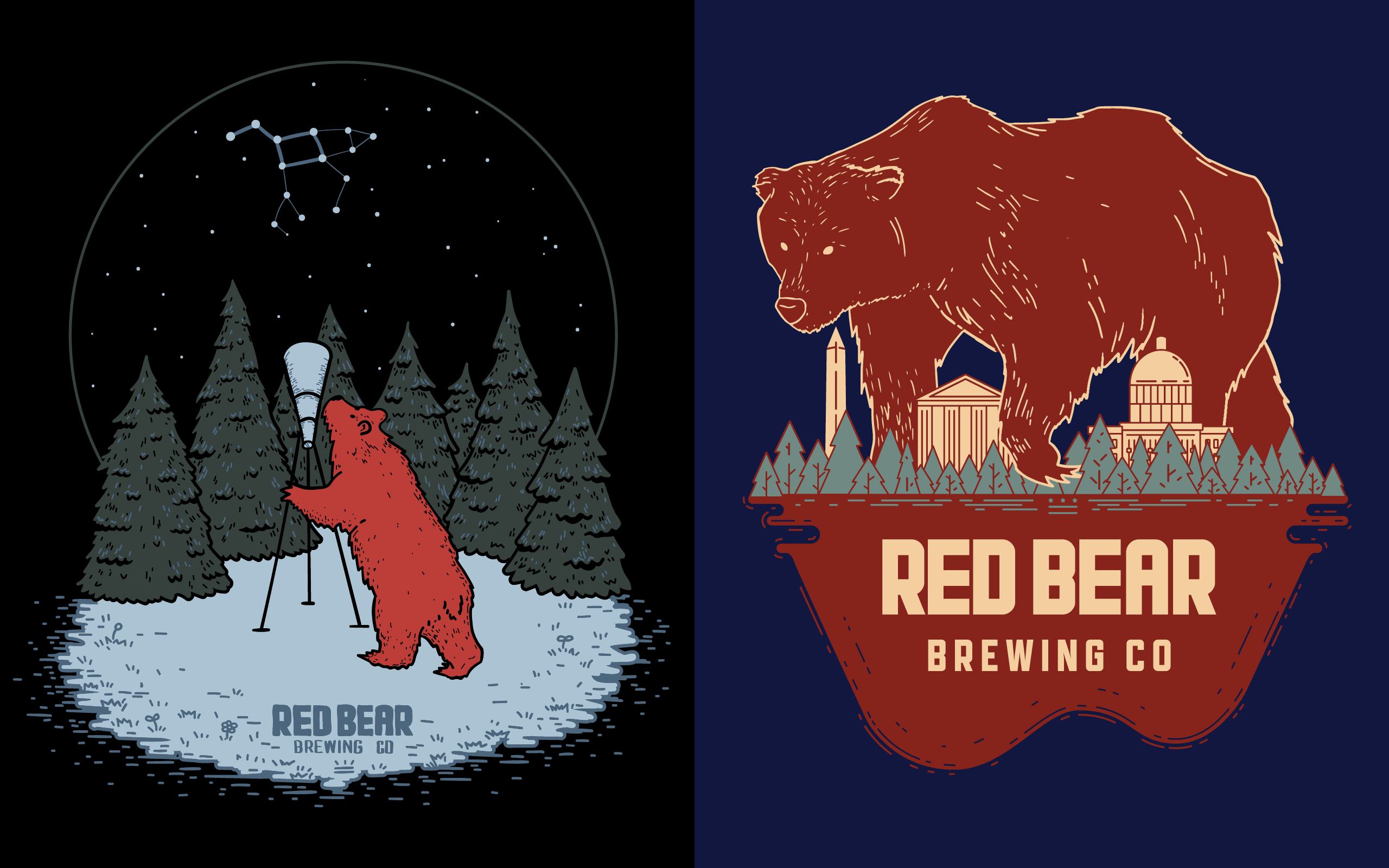 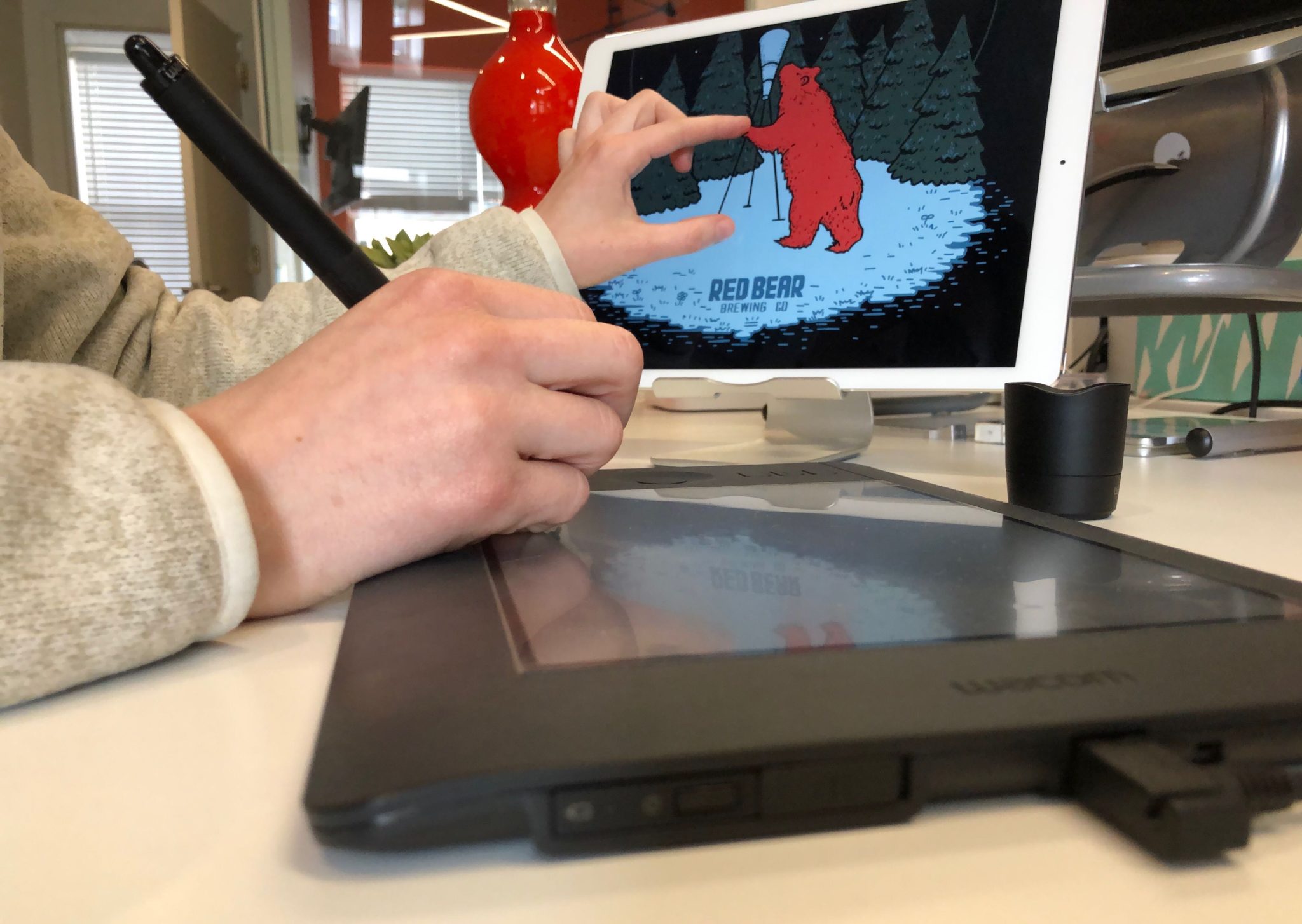 For the exclusive Kickstarter tees, they chose a night scene where a bear happened upon a telescope, looking up at the Ursa Major constellation. After weighing different methods of execution with our art director, we decided illustration would be the best way to approach the final artwork. From there, it was drawing and refining.

Another major deliverable was Red Bear’s Squarespace site. We first established what content they’d like to have on it, and then sorted out which pieces were essential for launch and which could be future enhancements. This long term planning allowed me to choose a robust and flexible theme and design that could handle more content.

The client gave us finalized copy from the get-go, which meant I was able to use Squarespace’s “blocks” to essentially wireframe out each page. I chose placeholder images that fit the context of the content, which in turn gave us a visual shot list for the photoshoot we’d later direct at the brewery with photographer Scott Henrichsen. 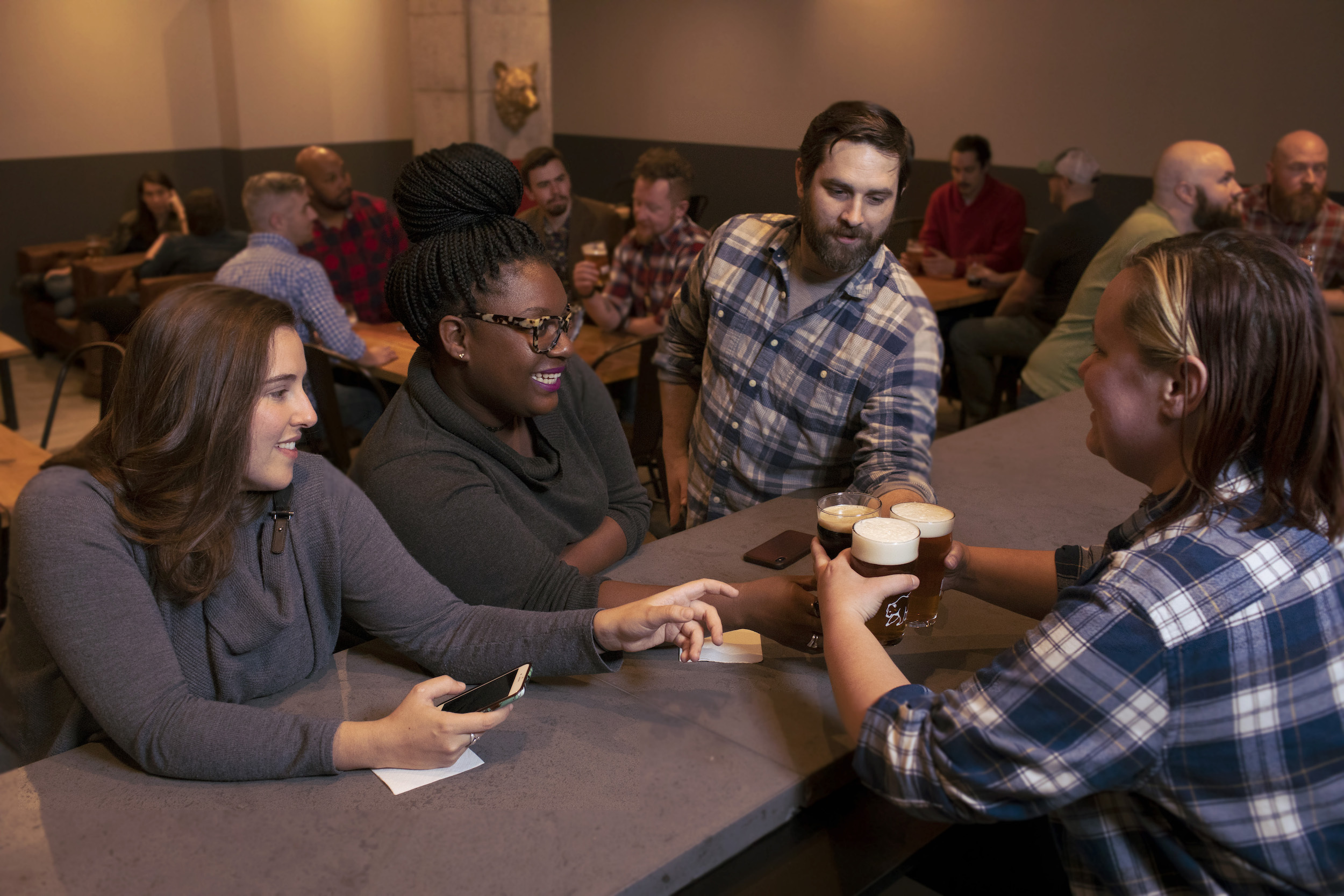 After a wildly successful grand opening, Red Bear was making headlines and was packed to the brim with customers. They came back to Brunch in mid-April asking us to develop a visual promo campaign for their inaugural DC Pride. They asked us to make “diversity” a main theme, and make the visuals “in your face, energetic, and celebratory.” The campaign manifested as staff and merch shirts, posters plastered around the city, limited edition beer glasses, and digital assets for their site and social media.

Our art director, Andrew Morgan, and I held a white-boarding-idea-dump session to get all ideas out there. We picked four that were conceptually strong, and then rapidly sketched out how the different campaign ideas could be applied visually across the collateral.

The Red Bear team unanimously agreed that “The Running of the Bears” fit the bill: it was light-hearted, inclusive, and had the “wow factor” they wanted for their first-ever Pride.

We began with the beer glass design because that piece had the longest production time. The design was small, and the details therefore had to be simple. Then we moved on to t-shirts and posters; I re-drew the artwork with more detail and adjusted the character holding the pride flag so they could be flag-less if needed. Because I built each character and bear in a modular way, the visual system was easy to manipulate to fit across the deliverables. 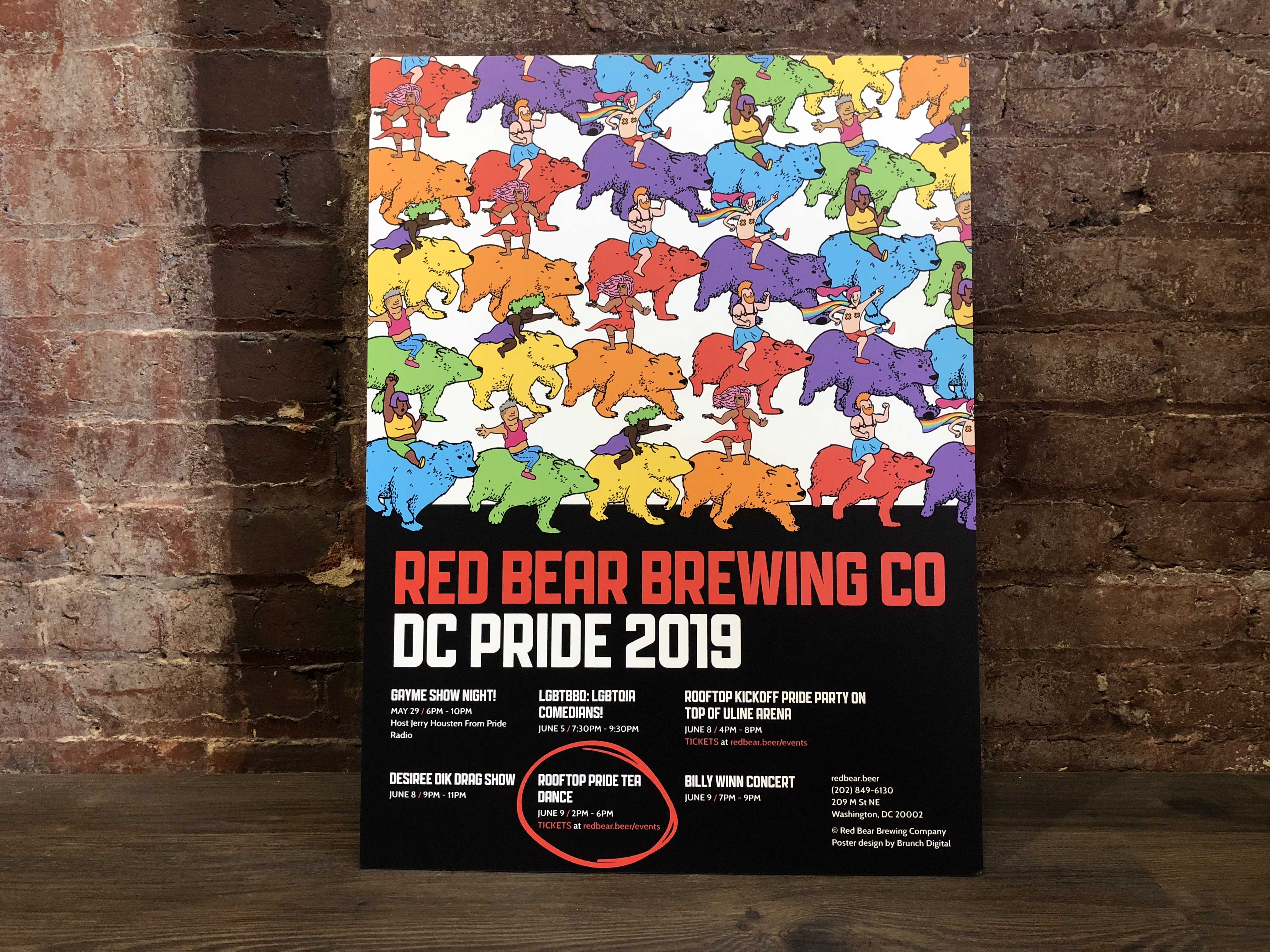 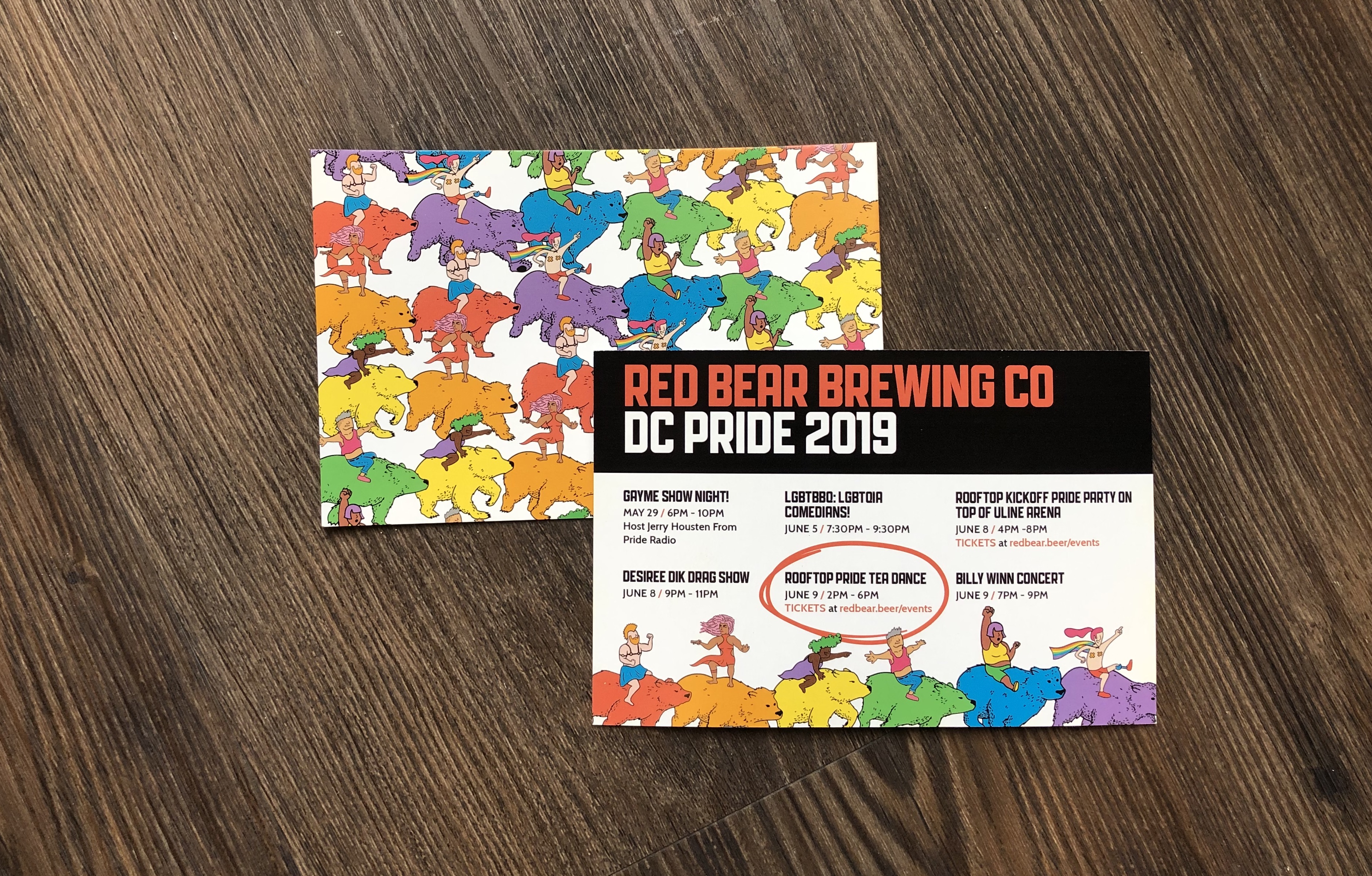 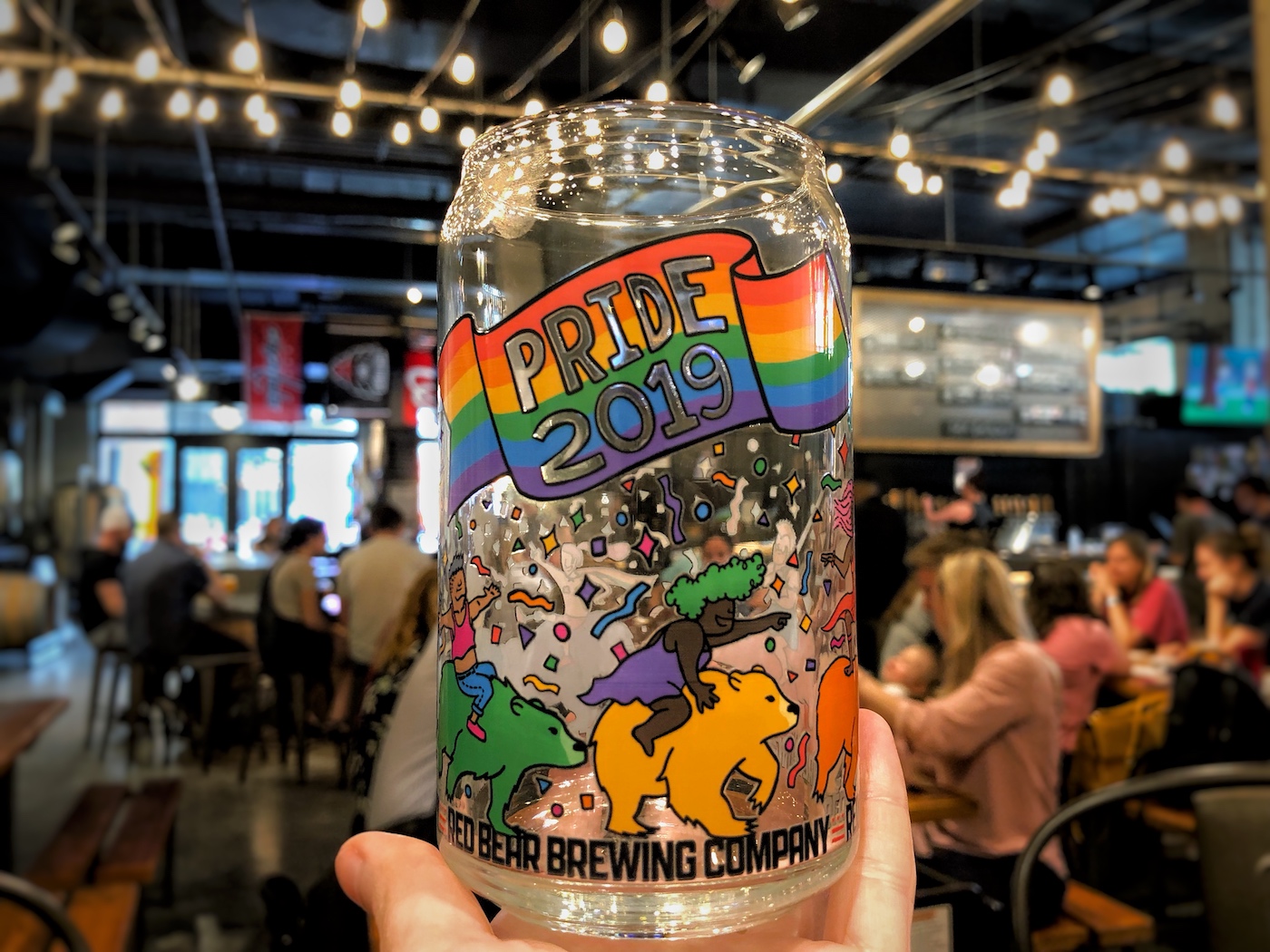